Why ‘Michael Schumacher-Ferrari’ is a one-off in Formula 1

The association between Michael Schumacher and Ferrari in Formula 1 (F1) was defined by its winning years. And by the years it wasn't

Of the many records that Michael Schumacher rewrote in Formula 1 (F1), and there were a great many, there’s one any subsequent rewriting of which will take something very special. That record doesn’t relate to the things that tend to define motor racing like wins, podiums, points, pole positions or fastest laps. That record relates to the maximum time spent by a driver with a single team.

A look at the German’s F1 career stats shows that between 1996 and 2006, Schumacher spent 11 consecutive seasons at Ferrari. In a sport that is calculative in nature, and can resemble the technology industry in its shifts, that’s the longest stretch any driver has had with an F1 team. Before Schumacher, it was nine seasons. And, among current drivers, Lewis Hamilton’s six seasons at Mercedes are the most.

It’s befitting then that on 3 January, Ferrari did something they have not done for any other driver who stepped into its F1 cars. It unveiled an exhibition on Schumacher’s years at Ferrari at its museum in Maranello, Italy, on the occasion of his 50th birthday. Count the reasons for this gesture. Schumacher is the most decorated driver in F1. Although he raced with two teams before Ferrari and one after, it was at Ferrari—the biggest and most evocative name in F1—where he burnished his and the team’s aura. Today, there’s the added poignancy of Schumacher battling for his life after a skiing accident five years ago.

Ferrari and Schumacher wasn’t just a meeting of a top driver and a top team. This was a turnaround story that revived Ferrari—in results, reputation and spirit—and Schumacher was the beating heart of that renaissance. Over 11 seasons, Ferrari went from being a bumbling midfield team to a slick front-running outfit.

In 1994 and 1995, Schumacher won the driver’s championship with Benetton, and things were looking good. But lured by an FI project dripping with ambition and the biggest paycheck in F1 history, Schumacher moved to Ferrari in 1996. The biggest name in F1 had not won a title since 1979.

That would come only in 2000, but the four years between 1996 and 1999 were defining in a different way. In their dogged chase of a goal, Ferrari and Schumacher made for compelling viewing. Despite a car with a speed deficit, in three of the four years, Ferrari stayed in the hunt for the driver’s title till the last race. 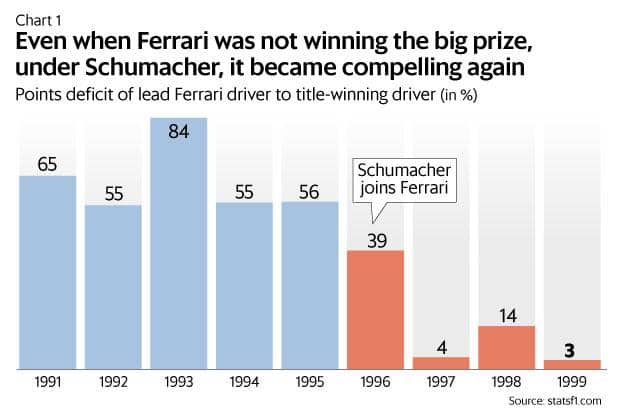 The team won 22 races in this period, including 18 by Schumacher. In the four years before that, Ferrari had won four races. It was a demonstration of Schumacher’s racing acumen, the team’s tactical nous and the organizational retooling happening under a new management.

Schumacher, a German, won over an Italian team with his relentless work ethic, and a manner of expression that could be both clinical and emotional. In 2000, Schumacher delivered Ferrari its first driver’s championship since 1979. Four more titles followed in emphatic fashion, before the competition caught up and overtook Ferrari in 2005 and 2006.

At 37, Schumacher left Ferrari and retired. He returned three years later with Mercedes, but that pairing never came close to capturing the euphoria that comes with a likeable partner who gives wings to fly. In all, Schumacher raced 180 times for Ferrari over 11 consecutive seasons, combining longevity with success: 72 race wins, 116 podiums and five driver titles. He also finished second on three occasions (including one disqualification for taking out another driver in a title fight) and third on another two occasions.

Most importantly, those years raised the bar of expectations at Ferrari where the goal every year, and with every signing, is a championship.

There have been other long driver-team combinations in F1, but none as unique as Schumacher-Ferrari. Some were long, but they neither operated at the top end nor yielded similar returns. Or, there were relatively shorter stretches that were impressive in their success—Lewis Hamilton’s ongoing stint at Mercedes and Sebastian Vettel’s previous stint at Red Bull—but they were bereft of the turnaround arc that fused an element of romance to the Ferrari-Schumacher narrative. 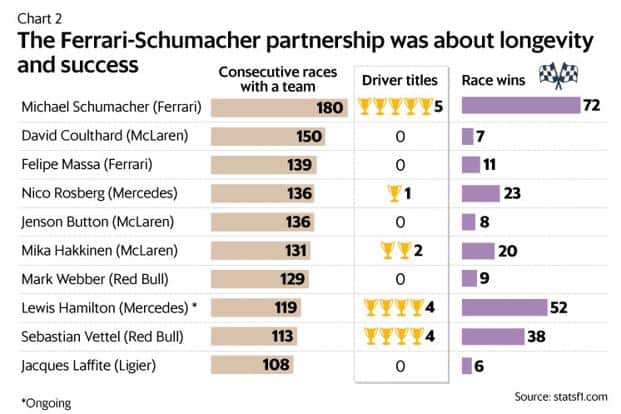 At his current pace, Hamilton at Mercedes could end up overhauling Schumacher’s success numbers with Ferrari.

If he keeps winning, Hamilton could even reset many records that Schumacher had lifted to astonishing levels in his Ferrari run. 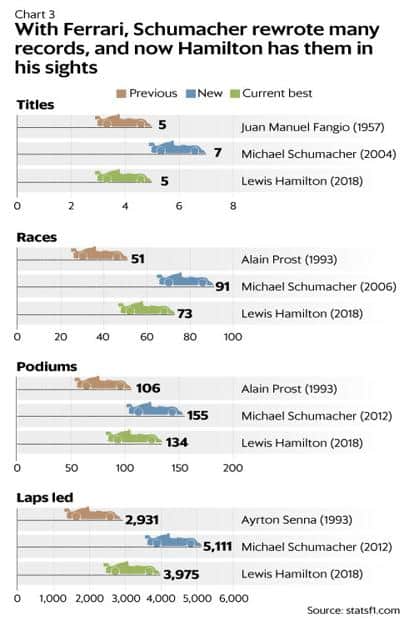 Hamilton-Mercedes will be a great tale, as it already is. It will also be spoken of in a different breath than Schumacher-Ferrari.