Maruti will soon go for lithium-ion batteries over lead 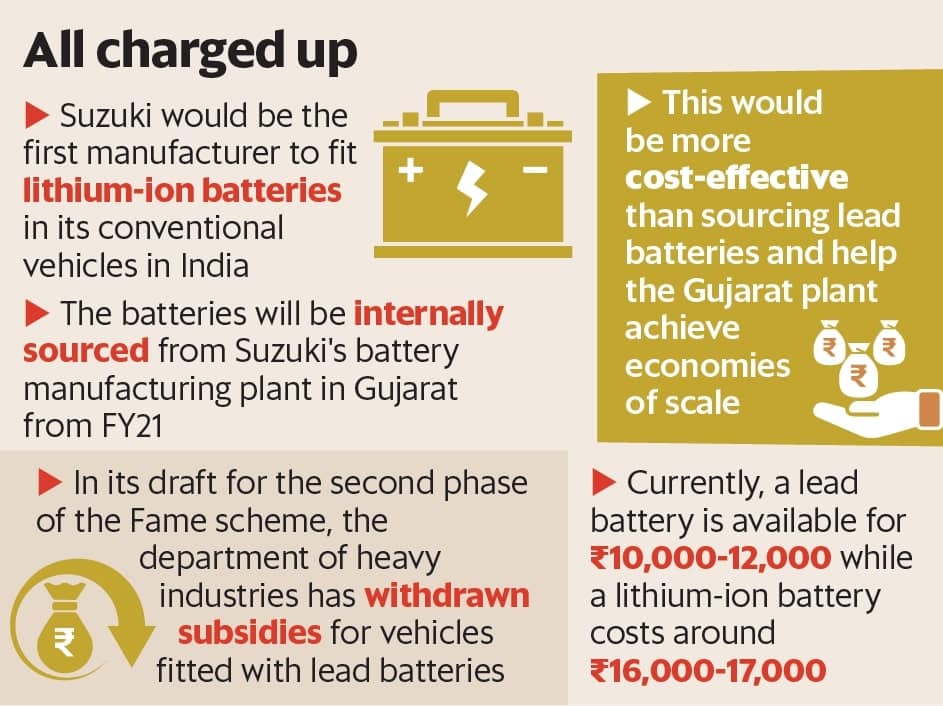 Suzuki expects that the benefits of doing so will be two-fold: it will be more cost-effective than sourcing lead batteries, and will also help the Gujarat battery plant achieve economies of scale.

“This move would give Suzuki economies of scale since Maruti sells 50% of the total cars in India. Even if they manage to fit 1 million cars with lithium-ion batteries, it will be huge in number. Also, it will be cheaper than sourcing lead batteries from vendors and prices of lead are always on the rise," said one of the two people cited above.

Suzuki is setting up the battery manufacturing plant in a joint venture with Toshiba Corp. and Denso Corp. at an estimated investment of ₹ 1,152 crore.

Almost all electric vehicles in the country run on imported batteries, mostly from China.

“I think Maruti Suzuki will be the first manufacturer to provide lithium-ion battery in cars in India in mass models. These small steps ahead of time have helped the company remained in leadership position in the market," said Puneet Gupta, associate director, vehicle sales forecasting, IHS Markit.

“Lead prices are increasing every day while lithium prices are expected to be around just $120 or almost the price of lead by 2021. If Suzuki can internally source this component, the cost benefit will be huge given the number of cars Maruti Suzuki sells. Apart from that, the company is investing in hybrids and electric technology where these batteries will be required," the second person said.

A spokesperson for Maruti Suzuki said the company will not be able to comment on queries emailed to it.

The Union government also wants the usage of lead to be reduced substantially in inverters and automobiles because of environmental concerns. The department of heavy industries, in its draft for the second phase of the Faster Adoption and Manufacturing of Hybrid and Electric Vehicles in India scheme, has withdrawn subsidies for vehicles fitted with lead batteries.

With Toyota also involved with Suzuki at a global level, the latter can also supply these batteries to hybrid vehicles manufactured by Toyota in India, according to the first person cited above. This will help Toyota in reducing the cost of its vehicles.