About one-third of households owned a two-wheeler in 2015-16 and a roughly equal share, 33.3%, owned a bicycle or animal cart

The NFHS surveyed more than 600,000 households in 2015-16, and among other things, provides district-wise representative data on ownership of vehicles. A Mint analysis of the unit-level NFHS data shows Tirupur district of Tamil Nadu has the highest ownership of two-wheelers, with nearly three-fourth of households owning either a scooter or motorcycle. Panchkula in Haryana has the highest share of four-wheeler-ownership, with four in 10 households owning a four-wheeler (including car, trucks, and tractors). All estimates have been weighted by the number of individuals in households in the analysis to account for the differences in household sizes across income classes.

The analysis also suggests tractor ownership is an imperfect indicator of rural fortunes, given that only 4.5% of the rural population own tractors. Among major states, the rural share of tractor owners exceeds 10% only in Punjab and Haryana.

Tamil Nadu, Haryana, Chhattisgarh, and Punjab saw the biggest increases in two-wheeler ownership between 2011 and 2015-16, an analysis of census and NFHS data suggests. Kerala, Tamil Nadu, Rajasthan and Haryana saw the biggest gains in ownership of four-wheelers. Punjab and Kerala have the highest concentration of car-ownership, with roughly one in four households in these states owning a four-wheeler as of 2015-16. The six largest urban agglomerations together account for less than one-fifth of four-wheeler owners in the country. Given that these agglomerations account for a little less than one-sixth of the country’s population, the concentration ratio does not appear stark. Delhi-NCR has the highest share of four-wheeler owners, followed by the Bengaluru and the Chennai regions, the analysis shows (charts 1A and 1B). 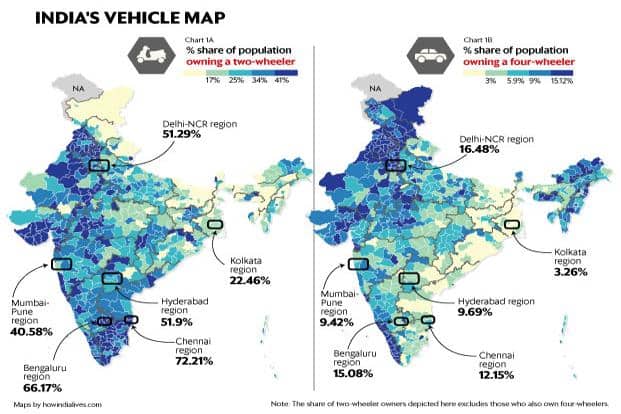 The Chennai region had the highest share of two-wheeler ownership at 72%, followed by the Bengaluru region at 66%. Among states, Punjab, Tamil Nadu, Kerala and Haryana have the highest shares of two-wheeler ownership, with every four in 10 households owning a two-wheeler in these states. Unlike in the West, bicycles seem to have become an inferior good in India, with the rich and the educated opting for four-wheelers, and the illiterate and the poor opting for bicycles. There is a similar divide among the educated and the uneducated. There seems to be an inverse relationship between the share of bicycle-owners and share of car-ownership across Indian districts (chart 2). 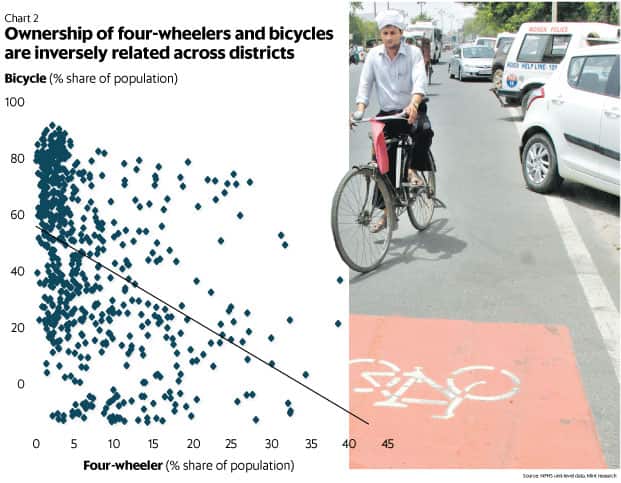 This is the second of a four-part series on India’s new geography of wealth.

The third part will map ownership of consumer durables across the country.