Maruti to roll out new entry-level car in 2020

Placed between the Alto and Wagon R, Maruti Suzuki's entry-level car code-named Y1K will have a petrol engine capacity of 800-1,000 cc

New Delhi: Maruti Suzuki India Ltd, the seller of every second car in the country, plans to introduce its first entry-level car in India in more than two decades, as a revival in rural consumption is expected to boost demand for such vehicles.

The made-in-India car, code-named Y1K, is in the development stage at the company’s newly built research and development facility in Rohtak, said two people with direct knowledge of the matter. The new product will only have a petrol engine capacity ranging between 800cc and 1,000cc, they said, requesting anonymity. 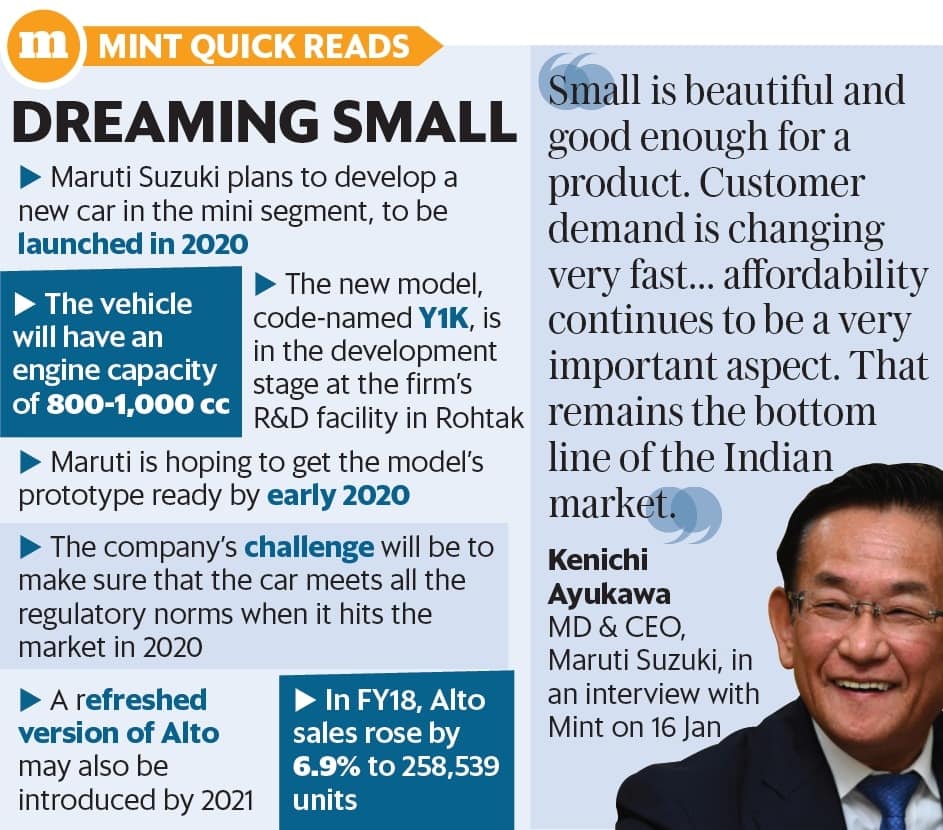 The challenge is to make sure that the car meets all the regulatory norms when it hits the market in 2020, around the time when safety and Bharat Stage VI emission norms—the most stringent in the world— take effect in the country, the people said.

“The car will set a new benchmark for entry-level products in the country," said one of the two people, referring to the perception that India’s small cars may no longer be small—in terms of both size and price tags—once new regulations on safety and emissions come into force.

Many of the models will need to be re-engineered, necessitating structural reforms such as using more steel to allow vehicles to meet new crash-test norms, adding airbags and anti-lock braking systems for increased safety, and installing diesel particulate filters and selective catalytic reduction technology in diesel cars to help them meet the Bharat Stage VI emission norms.

“The other challenge is to meet the price points as these changes will increase space and thus cost," said the person cited above.

A Maruti Suzuki spokesperson declined to comment on future products and technology.

Maruti’s move to introduce a new entry-level vehicle also comes at a time when the market share of such small cars is declining. The share of mini-cars such as Alto and Eon in overall passenger vehicle sales has declined from 35% in 2010 to 18% in the year ended 31 March 2018.

The new product will be placed between Maruti’s entry-level offerings Alto and Wagon R.

The company is hoping to be ready with the prototype of the model by early 2020 so that it can be introduced in the market the same year, said the second person.

Maruti’s managing director Kenichi Ayukawa has maintained that small cars will continue to be the bread and butter of his company, even as the Japanese company’s foray into mid-sized SUVs and sedans has increased its margins and profits in the last two years.

“Small is beautiful and good enough for a product," Ayukawa had told Mint in an interview earlier this year. “Customer demand is changing very fast. Any time, they want an affordable and good product... that is a basic. With the economic situation in the country changing, minds of customers are also changing. We have to find out what they are expecting. But affordability continues to be a very important aspect. That remains the bottom line of the Indian market," Ayukawa said about changing preference of the Indian consumers.

“The safety norms will increase the price but that would not hit Maruti as much as it will other manufacturers since it has economies of scale," said Deepesh Rathore, co-founder and director, Emerging Markets Automotive Advisors.

“Also, there is space for a new product and Maruti must have learnt from Renault Kwid, which came with an SUV-type look. The customers of this segment don’t have many choices as well," Rathore added.

Maruti first launched its small car, Maruti 800 in 1983, kicking off a revolution in the country both in terms of numbers sold and also by defining an entirely new category of cars. The unit of Japan’s Suzuki Motor Corp. then launched its second product in the segment, Alto, in 2000, which also become a household name and overtook its predecessor Maruti 800 as the highest selling vehicle in the country in 2004. A re-engineered version of Alto was launched in 2012.

According to the second person, a refreshed version of Alto is also expected to be introduced by 2021 and the new Wagon R will be in the market before that.