Scorching growth rates have created a high base for Royal Enfield, but investors were peeved by the mere 7% increase in sales during July

The Eicher Motors Ltd’s stock seems to be tired after riding in top gear for many quarters. Even the 25.3% year-on-year growth in its June quarter consolidated net profit to ₹ 576.2 crore failed to enthuse investors, given that it came a tad below consensus earnings estimates. Meanwhile, consolidated results that mirror the performance of the company’s premium motorcycle brand Royal Enfield, are showing that growth rates are slowing down after scaling dizzy heights. 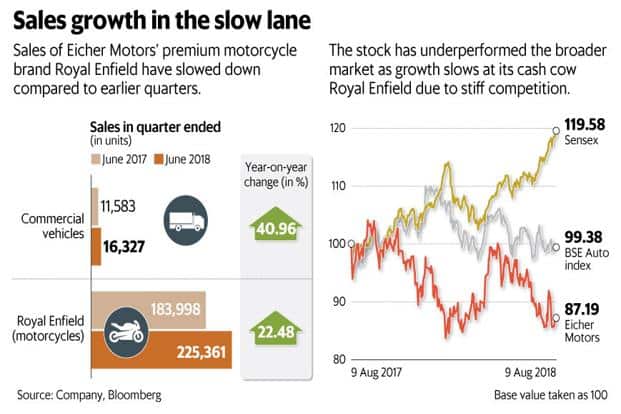 The 27.3% year-on-year revenue growth was driven by a 22.5% increase in quarterly motorcycle sales. To give the company its due, scorching growth rates have created a high base for Royal Enfield. But then, investors were peeved by the mere 7% increase in sales during July, which came as a big dampener.

While the management clarified that this was partly the effect of the transport strike, it would do little to improve confidence on the Street, until sales improve in the forthcoming months.

And there’s good reason for this thinking too. Domestic sales remained nearly stagnant for the last six-seven months.

In its recent report, SBICAP Securities Ltd says, “Our channel checks indicate intensifying ‘brand fatigue’, with the weakness in retails spreading beyond Maharashtra and Karnataka to other mature markets such as Kerala (Royal Enfield’s largest market) and Delhi during recent months."

Certainly this is not good news. Of course, Eicher Motors has maintained the operating performance, with consolidated Ebitda (earnings before interest, tax, depreciation and amortization) growing by 30.4% from the year-ago period. Profitability inched up slightly as seen in the 80 basis point rise in the Ebitda margin. A basis point is one-hundredth of a percentage point.

Indeed, Eicher Motors’ commercial vehicle business is racing ahead. June quarter sales rose by 41% translating into a 61% year-on-year jump in Ebitda. However, this is less material to the company as its consolidated earnings mainly mirror the Royal Enfield tale.

Besides, there is significant anxiety in the universe of premium motorcycles. Monthly sales growth has hit the slow lane from 30-40% a couple of years ago to about 20% currently. Analysts reckon that growth rates are now in line with the normal motorcycle industry.

Further, with more global manufacturers eyeing a share of the pie, Royal Enfield is faced with stiff competition.

Given this scenario, the sharp drop in Eicher Motors’ rich valuation is not surprising. In fact, at ₹ 27,484, the stock trades at about 21 times estimated earnings for fiscal year 2020, making the rich 40-50 times valuation, even a year ago, history.