New Delhi: A credit squeeze and a decline in farm incomes has crimped registrations of new cars, two-wheelers and commercial vehicles in December, leaving dealers to grapple with mounting inventory.

Total vehicle registrations fell sequentially in December even as companies offered a slew of discounts to entice customers and clear their year-end stocks, showed data from the Vahan website of the roads transport and highways ministry. The weak performance last month followed a subdued festival season this year.

Some dealers of Hero MotoCorp Ltd, the largest two-wheeler maker, are sitting on stocks that could last up to two months as sales in rural areas have been hit by lower incomes. The company has written a letter to its dealers acknowledging the situation. Sales from rural and semi-urban markets comprise almost 60% of total sales in the company.

Hero MotoCorp did not respond to an email sent on Wednesday.

Sales of commercial vehicles and two-wheelers are key indicators of rural sentiments and overall economic activity.

In December, registrations of two-wheelers fell 24% from November to 1.14 million units, while heavy commercial vehicles saw a 19% drop to 17,000 units. For passenger vehicles, registrations fell 17% to 203,000 units. 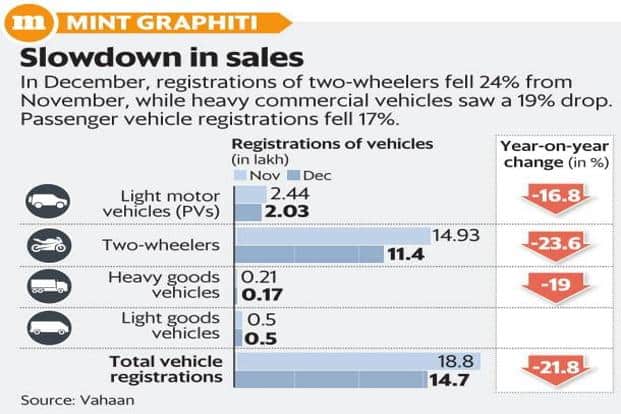 Vehicle registrations data offer the best indicator of retail sales in India since companies only provide wholesale data which is vehicles dispatched from factories to the dealerships.

The Vahan website includes data from most of the states—comprising almost 80% of the market —barring Madhya Pradesh, Telangana, Andhra Pradesh and Kerala.

A dealer for Hero MotoCorp in Uttar Pradesh said rural buyers are ordering fewer vehicles as farm incomes are under stress.

“Hero MotoCorp has written a letter to boost the morale of dealer partners by acknowledging the situation in the market. Certain dealers don’t even have the space to unload the vehicles near their showrooms. Companies which don’t have in-house financing arm are facing even more challenges," said the dealer.

Bucking the industry trend, Maruti Suzuki India Ltd—which controls more than half of the car market—posted record retail sales in December due to heavy discounts, indicating most of the other companies are still left with huge dealer stocks.

A dealer in Haryana said Maruti Suzuki has reduced its inventory by offering huge discounts in December and also because of a wide range of popular models.

“For commercial vehicles, such a crisis was not expected since the segment was growing in double-digits. Now, there is no credit available for fleet owners and the sentiment has also slipped and there is no sign of recovery," said the dealer.

Automobile sales stayed weak during Diwali and Navaratri, leaving dealers with stocks of more than 50 days and forcing companies to offer discounts.