Tata Motors Ltd’s dismal Q2 results highlights the challenges faced by the auto industry globally and the rising stress on the company’s balance sheet. Even as its domestic entity is bouncing back, the deterioration in sales of its UK subsidiary Jaguar Land Rover Automotive Plc (JLR) is now a festering wound. Compared to a contraction in sales of 5.1% year-on-year in the June quarter, JLR’s sales fell by 14.7% in the September quarter. The “unanticipated surprise", as the management phrased it, was China’s severe 43.8% drop in sales— a pathetic show given that the drop was 7.7% for the industry as a whole. Weaker consumer confidence and tariff uncertainties due to US-China trade tensions were blamed. 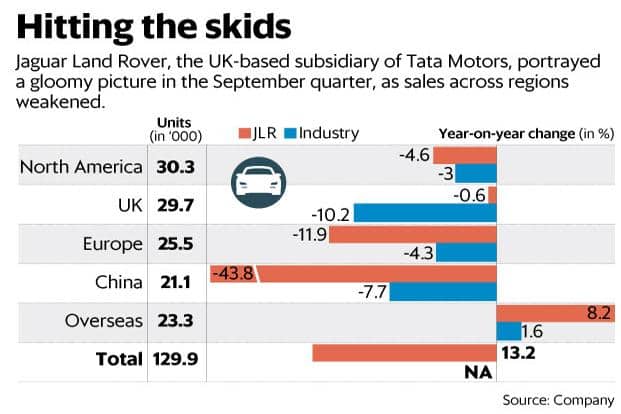 The story in the US and UK markets was equally woeful, though the reasons were different—lower demand for diesel vehicles, market cyclicality and Brexit-linked issues. Sales in these two regions contracted by 4.6% and 11.4%, respectively.

All this translated into weak cash flows as revenues were not sufficient to cover costs and drive profits. JLR’s Ebitda (earnings before interest, tax, depreciation and amortization) margin drop of 270 basis points year-on-year to 9.1% dragged down the consolidated margin of Tata Motors too down by 130 basis points to 9.9%. One hundred basis points equal one percentage points.

Tata Motors’ decision to prune capex spends in JLR from £4.5 billion to £4 billion in FY19 and FY20, is a telling signal on the need for tight cost control and also a commentary on the growth outlook. Analysts say that while the firm has been proactive in launching new models, incumbents such as Daimler AG, BMW AG and Audi pose stiff competition.

JLR’s loss was a tad lower than that posted in the June quarter. But it dragged down the consolidated loss to ₹ 1,001 crore, far more than Bloomberg’s estimated loss of ₹ 874 crore.

Given these strong headwinds, the stock that trades at ₹ 178, is unlikely to offer any succour to investors soon. Any news on China’s intent to ease taxes on automobiles to arrest falling sales may see the stock light up momentarily. Otherwise, it is a painful road ahead for both the company and investors.