Amazon India also claimed it grew much faster than Flipkart in April-September, saying gross sales rose 66% in the six months

Bengaluru: Amazon India said its gross sales volume rose 67% from a year earlier in the September quarter, as the online retailer continued to grow at a rapid pace and keep larger rival Flipkart in its sights.

Gross sales by value jumped 72% during the quarter, numbers shared by Amazon India with Mint show. The broader online retail market is estimated to be growing at roughly 25-30%, according to brokerages and experts tracking e-commerce in India. Gross sales refers to the value of goods sold on a platform.

Amazon India also claimed it grew much faster than Flipkart in April-September, saying gross sales rose 66% in the six months. That figure is considerably higher than the figures that were revealed in the recent half-yearly report from one of Flipkart’s largest investors, Naspers, which indicated that Flipkart grew 43% during that period, as Mint reported on 1 December. 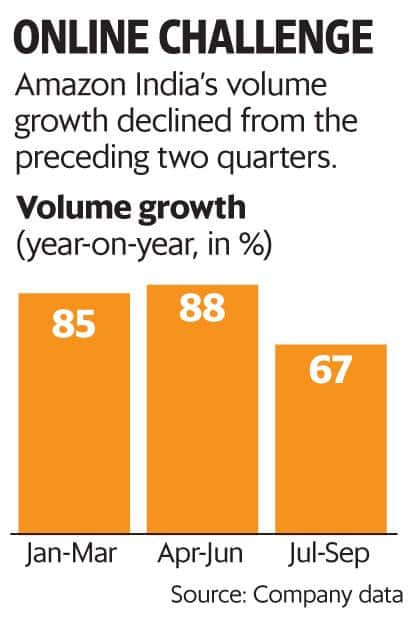 A Flipkart spokesperson clarified that the figure cited by Naspers included “a time lag" and that the firm’s sales actually grew by “at least 80%" in April-September. “Flipkart continues to outpace the industry and our growth has accelerated significantly during the July-September quarter on the back of a very strong festive season. This report actually refers to the January-June period and, as all growth data, has a lag of three months so the comparison isn’t like-for-like or relevant," the spokesperson said in an email.

Neither Amazon nor Flipkart disclosed their exact gross sales figures.

While the latest figures from Amazon indicate it is successfully keeping pace with Flipkart, Amazon’s sales volume growth actually slowed considerably from the preceding two quarters, when it grew 85% and 88%, respectively.

Two Amazon executives attributed the fall to a rise in big-ticket purchases, as customers typically buy high-value products such as large appliances and smartphones during the festival season.

Amazon’s impressive growth rate is also partly due to the base effect—a year ago, its overall sales were much lower, when Flipkart enjoyed a larger base. Amazon’s numbers also need to be taken in the context of its recent festive season battle with Flipkart. Mint reported on 27 September that Flipkart beat Amazon during the face-off, generating gross sales of over Rs5,000 crore in its five-day Big Billion Days sale, while Amazon generated gross sales of Rs2,500- 2,700 crore in its four-day Great Indian Festival sale.

Amazon has repeatedly disputed that it lags Flipkart (excluding subsidiaries Myntra and Jabong) and said it is consistently well ahead of Flipkart on metrics such as app downloads, desktop visits and mobile website visits.

For Amazon, its Prime subscription service has also proved to be a massive lever of growth, especially in top-tier cities in India, with Prime accounting for at least a third of all its orders.