Private equity in India represents about 1% of GDP, but it has contributed 3-5% of capital raised by Indian firms in past five years

Despite the Indian government’s plans in 2012 to push forward the renewable energy sector, funds were in short supply and traditional capital sources were hesitant to jump in. Enter Sumant Sinha, who founded ReNew Power Ventures Pvt. Ltd, an independent power producer with a focus on generating power using wind energy. The company was able to set up more than 1 gigawatt of power-generation capacity on the back of the interest shown by private capital investors led by Goldman Sachs, which itself invested $250 million in the company in 2011 and another $135 million two years later, marking the largest private equity (PE) investment in India’s renewable energy sector at that time.

This success story proves the huge and dynamic potential of private capital in India. Since private equity was introduced to the country nearly 20 years ago, it has grown considerably and today plays a pivotal role in providing capital to entrepreneurs and management teams. 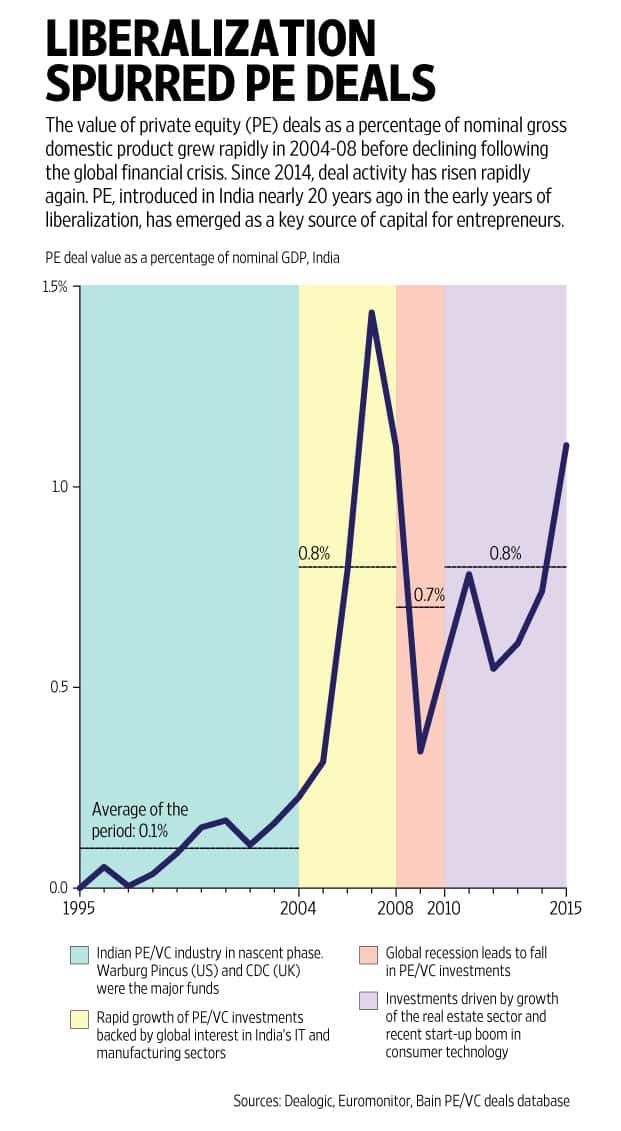 Backed by significant reserves of primarily foreign capital, alternative investment has contributed substantially to India’s financial growth, deploying more than $100 billion in 5,000-plus companies and projects and more than 6,500 deals in the past 15 years. Compared with the US, PE in India is still nascent, representing roughly 1% of the GDP (versus roughly 3% for the US), but it has come a long way in the past five years, contributing 3-5% of the total capital raised by Indian companies. Private equity is patient capital. Even when corporate investors pulled back investments and foreign direct investment slowed, PE funds continued to invest. In fact, last year was by far the best for PE in India, with more than $22.9 billion put to work. It is not by chance that India is seeing such rapid growth in PE. Private capital has gone through many life stages before reaching its present level of importance. The Technology Development and Information Company of India Ltd, a venture capital fund promoted by ICICI and UTI Bank (now known as Axis Bank), was the first venture capital (VC) fund to emerge nearly 30 years ago. It was quickly joined by a few domestic funds such as Gujarat Venture Finance Ltd and ICICI Ventures, plus foreign funds such as Actis LLP and Warburg Pincus LLC (with the latter helping fuel the growth of the private telecom industry in India). However, PE growth paused in 2000-01 due to the dotcom crisis; it picked up from 2005 as the global economy slowly became more favourable and investors became excited about emerging economies and the economic opportunities waiting to be tapped.

Since 2005, the growth in Indian PE has revealed five key trends.

• Growing interest in investing in India has increased the number of alternative investment funds, and Indian promoters have relatively easier access to capital markets than their peers in the US or China. While corporate debt markets in India are still nascent, bank credit to large businesses is available on attractive terms. In this context, the increase in the number of funds participating in the market and the corresponding growth of business deals in India is significant. It also translates to a deepening of the PE market—from real estate funds to mezzanine and debt investments from large funds—along with a broadening of deal structures, which are becoming successful.

• The second key trend has been a gradual moderation of valuation expectations. Indian fund managers are now increasingly pragmatic after having ridden the PE roller-coaster. Private equity initially peaked in 2007 at approximately $17 billion—more than the total value of all the PE and VC investments made in the preceding decade. However, the investment euphoria died down when the economy slowed after the global financial meltdown of 2008, forcing fund managers to go back to the basics. Valuable lessons have been learnt: today, investors are more careful with their investment theses, conducting deeper diligence before investing. Indian promoters have reset expectations in accordance with the public markets—but these will likely rise when the markets rebound. PE is thus more likely currently to return money according to expectations, freeing the virtuous cycle of attracting additional capital.

• PE investors’ participation in and contributions to their investee companies has deepened, going beyond capital requirements. Until 2011, PE deals were largely for minority investments and generally limited to select sectors. Now, PE deal flow has strengthened and become broader, though there is a lot of room for it to get deeper in specific sectors. The numbers and investments going into buyout deals are increasing, as are investments in a larger variety of sectors such as real estate and healthcare. The past five years have also seen an increase in the number of angel networks in venture capital and in early-stage investment. Though there is still some way to go, PE inflows in 2015 constituted around $7 billion of investments in consumer Internet companies, without which the recent spike in entrepreneurial activity would not have been possible. • Promoters and management teams are also warming up to PE and venture capital. For investee companies, PE is moving from being seen as a last-resort source of capital to a credible source of “activist capital", with value deeper than just providing initial investment. While a large section of PE funds are still balancing their activism and evolving their approach to collaborate with management teams, many PE fund owners are already playing an active role. As mentors, they are guiding the strategic direction of the companies through board participation, making companies more financially savvy and disciplined, bringing operational experience to help better cost efficiency and provide front-line acceleration, and using their own networks and contacts to support their investee companies. Such a patient approach creates more value for investors and entrepreneurs alike; it also helps Indian companies scale up to operate at world-class levels without facing the pressure to address quarterly requirements or pay down debts.

• Despite volatile capital markets and a depreciating currency, an exits track record—so vital to maintaining steady capital inflows and helping limited partners (LPs) choose the right general partners (GPs) to trust—has been built, marking the start of returning capital and returns back to the LPs. From the total value invested in non-real estate, energy and infrastructure deals (around $54 billion) through 2012, approximately $60 billion has been returned to investors. In fact, 2015 was a record year for exits, totalling roughly $10 billion, 1.5 times over 2014, illustrating the successful collaboration between investment funds and investee companies. But there is still work to be done: More than 60% of deals before 2012 in non-real estate, energy and infrastructure have not seen exits. Clearly, PE owners need to strategize harder for exits, clean up their deal books and incorporate learnings as they make new investments. Building a sound exit thesis is as important as doing detailed diligence on the health of the business.

The PE industry is poised to become a vibrant contributor to the nation’s economy. To keep private equity on a positive path, stakeholders such as fund managers, LPs, the government and regulators must together create an enabling environment. The government needs to provide clarity on allowing development of a vibrant local domestic LP pool, on tax on carried interest by general partners and the introduction of regulatory reforms, permitting the participation of private and foreign capital.

There’s no doubt that private capital plays a vital role in India’s growth. That role is only going to expand. Every percentage point of GDP growth will need close to $30 billion of additional capital, according to a Bain analysis. At the current pace of development of equity, bonds, external commercial borrowings and bank credit pools, private capital investments will have to double in order to fund the country’s growth. Creating an enabling environment for private capital will not only help Indian businesses grow and thrive, but set the stage for economic growth in the years to come.