Home >Companies >How much premium is a buyer of Indian firms willing to pay to gain control?

How much premium is a buyer of Indian firms willing to pay to gain control?

Controlling interests are usually more valuable than minority shares, because they often contain a bundle of rights that minority shareholders do not enjoy

Mumbai: Buyers of Indian companies paid a median 34% premium to market price to gain control, says a study by Price Waterhouse & Co LLP. The study was based on 158 open offer transactions reported from 2007 to 2015.

This premium to the market price, called the control premium, is the incremental value that an acquirer believes can be generated from getting control over the target company’s operations and being able to extract higher cash flows post acquisition.

Controlling interests are usually more valuable than minority shares, because they often contain a bundle of rights that minority shareholders do not enjoy. 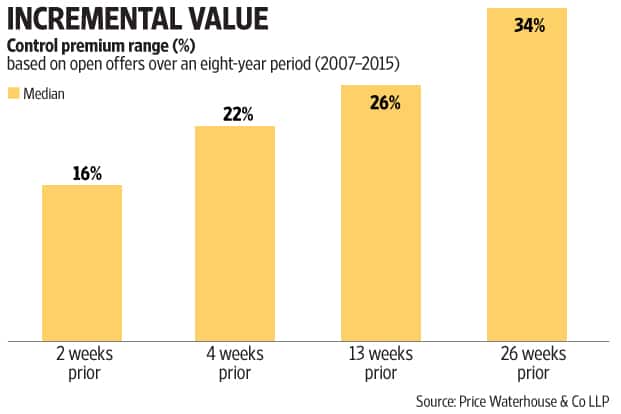 For instance, the report highlighted that Sun Pharmaceutical Industries Ltd acquired Ranbaxy Laboratories Ltd in April 2014 at an implied premium of approximately 24% on Ranbaxy’s market price 30 days prior to the transaction. Similarly, ING Vysya Bank’s merger with Kotak Mahindra Bank in November 2014 was also at an almost 25% premium on ING Vysya Bank’s market price 30 days prior to the public announcement.

Control premiums tend to vary across industries. The premium over the market price six months prior to a transaction was 116% for oil and gas companies and 64% for hospitality firms. But that could also be owing to the fact that there were few transactions and, thus, the number is statistically less reliable. 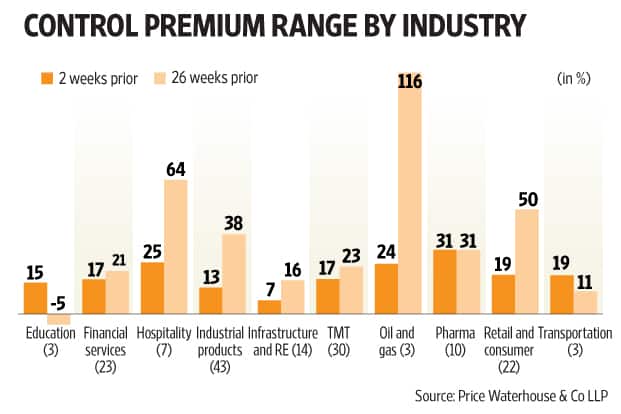 Conversely, the observed control premium falls within a reasonable range where the number of observed transactions is higher; for instance, in financial services, industrial products, technology, media and telecommunications (TMT), retail and consumer and pharma.