Mumbai: Ratan Tata, retiring soon as chairman of India’s sprawling Tata conglomerate, is known for making sketches of the company’s next car model and fussing over details of a hotel’s design.

Whoever succeeds him in India’s highest-profile job is likely to be less caught up in details and more focused on taming an unwieldy $67 billion business that earns pedestrian returns and is saddled with debt after an acquisition spree.

The search for a successor to head the enterprise, founded by 73-year-old Ratan Tata’s great-grandfather in 1868, has not gone entirely as planned. Last August, Ratan Tata, who has been at the helm for 20 years, had predicted it would announce a successor by March this year.

No announcement is imminent, a source with direct knowledge of the matter told Reuters earlier this week. 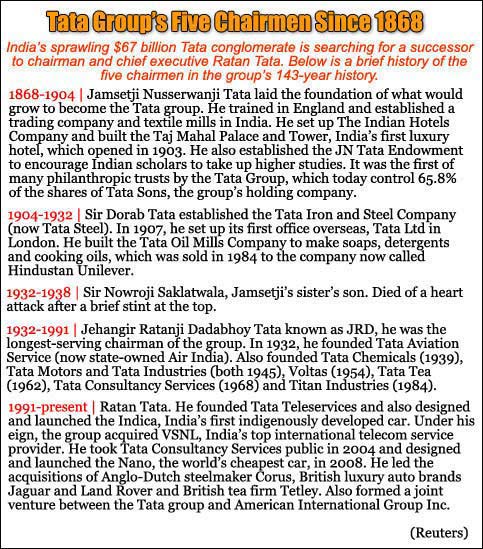 Tata’s new boss must manage a group that was founded as a textile company, but now spans everything from cars and consultancy to telecoms and tea, and embodies India’s global ambitions. Two-thirds of Tata’s revenue is generated abroad.

Succession is an increasingly important risk factor for investors in corporate India, dominated by family dynasties.

“It has been tough to find someone who is a natural fit for the role," said the person with direct knowledge of the matter, declining to be identified because details about the search are not public. “We will probably change what we are looking for," the person said, referring to the search criteria.

Some of the top names in India’s formidable executive diaspora have been in the mix at various stages in the process.

One potential front-runner yet to win the full support of the five-member search panel is Ratan Tata’s half-brother, 54-year-old Noel Tata, sources with direct knowledge of the matter told Reuters.

Noel Tata is the son-in-law of Pallonji Mistry, the single largest shareholder in group holding company Tata Sons. He was recently moved into the top spot at the group’s international operations in a move seen aimed at grooming him for the top job.

But Ratan Tata hinted in an interview with The Times of London that Noel was not ready for the role.

“I think if he is to run this he should have greater exposure than he has had. Partly his not having it has been his own choice," he was quoted as saying.

A spokesman for Tata Sons said the panel had interviewed internal and external candidates. Seven candidates remain on the list, including some from within Tata, the source with direct knowledge of the matter said.

Tata has grown, mainly through acquisitions, from a $5 billion group to a $68 billion giant during Ratan Tata’s time in charge.

But scale and scope have not translated to big profits and pose a key challenge for Tata’s successor. In the fiscal year ending in March 2010, the most recent year for which group data is available, Tata’s 98 units generated revenue of $67.4 billion but turned profits of just $1.7 billion.

“Investors would definitely like to see a much bigger profit," said Taina Erajuuri, a Helsinki-based portfolio manager at FIM India, which owns shares in Tata Consultancy Services , Tata Motors , Tata Steel and Titan Industries , the group’s jewellery and watch retailer.

Two acquisitions made near the top of the market in 2007 and 2008 — Tata Steel’s $13 billion deal for Anglo-Dutch steelmaker Corus and Tata Motors’ $2.3 billion purchase of luxury car brands Jaguar and Land Rover — put the group on the global map but have left the two companies with $14 billion of net debt on their books.

While Tata Motors turned around Jaguar Land Rover, it has had less success with the Nano car, Ratan Tata’s brainchild marketed as a safer alternative for families commuting on two-wheelers, a common sight in India.

Only 110,000 Nanos, touted as the world’s cheapest car, have been sold since sales began in April 2009, well below market expectations and the company’s eventual target of 1 million per year. The Nano’s image took a knock when some burst into flames.

The top 10 listed companies in the group generated $62.5 billion in revenue in fiscal 2010, earning $2.1 billion in profit. That means the other 88 firms generated only 7.5% of the group’s total revenue and collectively posted a loss.

Even Indian Hotels, which includes the storied Pierre hotel in New York and Mumbai’s Taj Mahal Palace, the target of terror attacks in 2008 and home to US President Barack Obama and his wife when they visited the country last year, is loss-making.

“The priority of the successor would be to increase profit, streamline businesses, consolidate where there are synergies, list the companies that can be listed when the market is right, and sell what they can do without," Erajuuri said.

Tata’s diversity means it is battling on multiple fronts, which will require discipline and focus from its next leader and will force some tough decisions.

The group’s telecoms business is stuck in a ferocious price war with more than a dozen rivals and has seen Ratan Tata personally dragged into an embarrassing corruption scandal.

“Indian telecoms is a fragmented space, and consolidation is inevitable," Erajuuri said. “Tata is a very small player, and the successor will have to do something — either buy or sell."

Tata is also trying to expand its retail business to take advantage of burgeoning demand in Asia’s third-largest economy.

“Retail probably needs a bit more attention," said Saurabh Mukherjea, head of equities at Ambit Capital in Mumbai. “That’s one leg of our economic story they haven’t been able to squeeze as much juice out of as they would have probably liked to, given the strength of the Tata brand."

The group has also said it wants to build up its brand in the United States.

The Tata group was founded as a textile business in 1868 by Ratan’s great-grandfather Jamsetji Tata, a member of the close-knit Parsi community — Persian Zoroastrians who fled to India around the 10th century. His older son expanded into steel, insurance and the production of soaps and cooking oil.

Jamsetji’s nephew took over for a brief period, after which the baton went to JRD Tata, who led the group for 53 years. He founded mainstay companies Tata Motors and Tata Consultancy Services, the biggest contributor to the group’s profit.

An aviation enthusiast, JRD Tata launched India’s first commercial airline. In 1932, it took to the skies in Indian aviation’s maiden flight with JRD Tata at the controls.

Ratan Tata inherited that love of aviation and is a licensed pilot with a degree in architecture from Cornell University.

Unmarried and living a relatively frugal life with his dogs.