Bengaluru: India’s biggest online retailers Flipkart and Amazon are pulling out all the stops to woo top smartphone brands such as Apple, Samsung, Xiaomi and Huawei to exclusively sell their wares on their online marketplaces, as they joust for an edge during the Diwali shopping season. Smartphones account for nearly half of gross merchandise value (GMV) for Indian e-commerce companies and is easily the most important category for top online retailers such as Flipkart and Amazon, although both companies have always downplayed their reliance on phone sales.

In fact, India’s e-commerce boom began with the sale of smartphones back in 2014, when Flipkart started exclusively selling Motorola’s Moto G phones. Since then, Flipkart’s strategy of signing up exclusives has changed the smartphone market and launching phones exclusively with either Flipkart or Amazon has become the default choice for many brands. 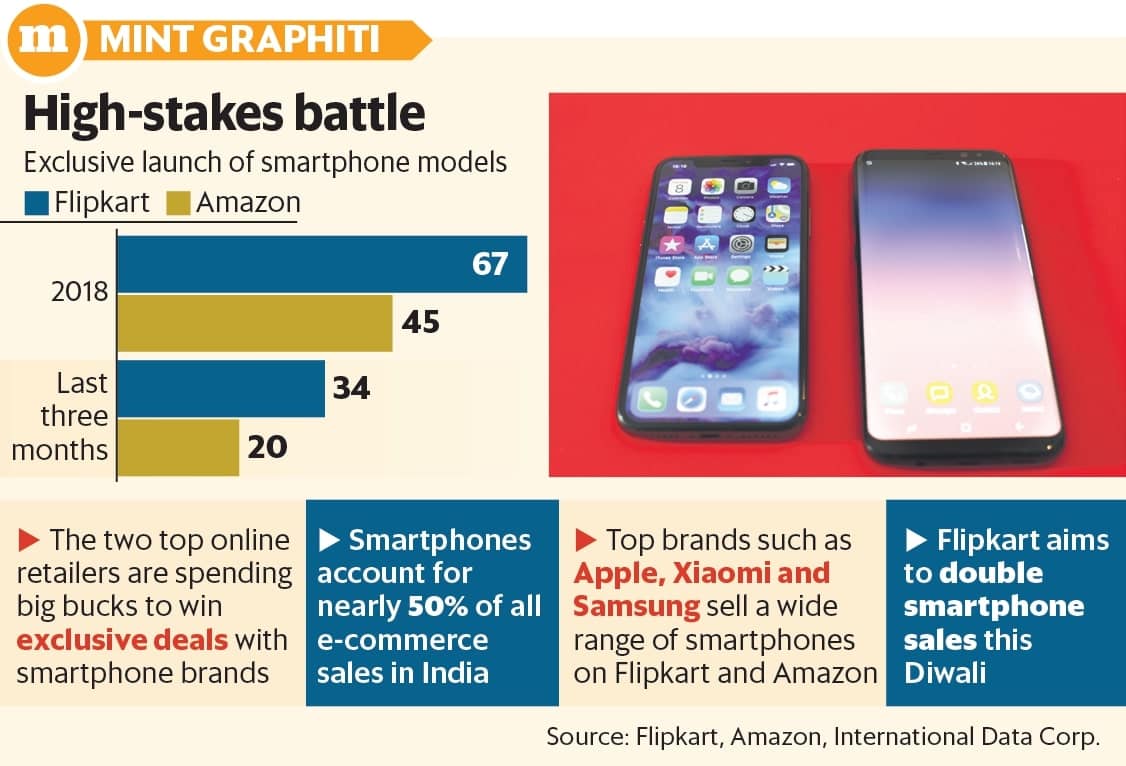 Under CEO Kalyan Krishnamurthy, who has been largely responsible for Flipkart’s push to return its focus on bagging exclusive partnerships, the company has set aggressive targets for the entire Diwali festival season sale, and not just for its upcoming flagship five-day Big Billion Day (BBD) sale. Flipkart has set a target to double smartphone sales during this Diwali, as compared to last year’s festival season sale, according to a top company executive.

One of the key partnerships that Flipkart has forged ahead of BBD is with Huawei. Huawei’s Honor brand of smartphones has grown four-fold in terms of unit sales over the past year, and the company has set an aggressive target to sell 1 million phones during the one-month long festival season sale on Flipkart. Honor has, in fact, signed a strategic partnership with Flipkart.

“Flipkart has partnered with us very closely since January this year...with that we’ve been able to move really fast. By February, we had sold nearly a million phones (through Flipkart)," said P. Sanjeev, vice-president of sales, Huawei & Honor consumer business. “We now have an objective with Flipkart to give out the best possible offers to get us a million more phones (sales) during the festive season."

A Flipkart spokeswoman claimed that it has more than twice the number of exclusive brands on its platform than Amazon, while Amazon disputed those figures and indicated that it is currently neck-to-neck with Flipkart on exclusive tie-ups.

According to at least four executives at Flipkart and Amazon, Flipkart is currently the market leader and ahead of Amazon in the smartphone category in terms of both units and GMV.

Amazon disputes Flipkart’s leadership in the smartphone segment and says it continues to be the destination of choice for shoppers.

“Over the last one year, we have seen close to 1.5 times growth for the category with a selection of over 18,000 products by top brands such as Xiaomi, OnePlus, Samsung, Honor to name a few," said Noor Patel, director, category management at Amazon India.

Given the mammoth size of the smartphone business, both Flipkart and Amazon are obsessed about winning the battle in this category, given that a huge amount of market share is literally at stake. During the 4-5 months leading to Diwali, executives from both Amazon and Flipkart typically spend much of their time on the road, meeting executives at smartphone makers and signing up partnerships.

Executives at both companies are also bullish on the smartphone business ahead of this Diwali, given that the market has seen a revival during the past 12 months, after witnessing a slowdown in 2016-17, according to estimates from IDC.

“Flipkart and Amazon are trying to onboard increasing number of online exclusive smartphones to maintain their market share as exclusive smartphones are the main shipment driver. Going forward, we expect a record smartphones sales during festive season this year with online contribution likely to hit the 40% mark," said Tarun Pathak, associate director at Counterpoint Research.