Bangalore: India’s first international container trans-shipment terminal (ICTT) at Vallarpadam in Cochin port has been bogged down by archaic policies and lack of government clearances, preventing it from functioning as a hub almost 11 months after it started operations.

Trans-shipment refers to the shipment of goods or containers to an intermediate destination, before being taken to the final destination.

DP World, the world’s fourth biggest container port operator majority, owned by the Dubai government, won the 30-year contract to build and operate the ICTT in a public auction in 2004. The ICTT operates in a special economic zone (SEZ). 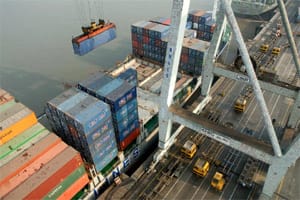 Since February 2011, only two new mainline services have been started from ICTT— to Europe and the Far East. The ICTT also has container shipping services that were shifted to it from the old container terminal at Cochin port.

“Cochin port continues to serve the same old market it has traditionally catered to. Cabotage laws are a barrier to bigger ships calling at ICTT," said Karikkassery. “Owing to the law we are forced to send our containers via Colombo and spend extra money and time"

Cabotage laws do not permit feeder services between Indian ports on foreign flag vessels. India’s coastal trade (shipping cargo between local ports) is reserved for India-registered ships and foreign ships can be hired only when local ships are not available.

The shipping ministry has been discussing a possible relaxation of the regulations with stake holders for several months. A final decision is, however, pending. “Such decisions do take time," shipping secretary K. Mohandas said. “Several factors have to be taken into consideration."

Between April and November 2011, the ICTT loaded 232,000 standard containers compared with 222,000 handled a year earlier by the old Rajiv Gandhi container facility, which was shut down after ICTT started operations.

“Hence, setting up a transshipment hub at Cochin port has brought no benefit at all to the port by means of larger reach, new markets and more volume," said a DP World spokesperson. “The ICTT would find it difficult to get new main line services or even retain the existing services without being able to transship."

India’s exporters and importers pay at least $200 extra to transport a container via Colombo port apart from extra transit time of up to eight days on shipments, according to analysts.

Paul Anthony, chairman of Cochin port, was not immediately available for comment.

Significantly, the Sri Lanka government is expanding the island nation’s container loading capacities at Colombo as well as coming up with a new port at Hambantota at an investment of $3.4 billion, mostly from Chinese firms. The country is eyeing grabbing a larger slice of the container traffic originating from and bound for India.

The Vallarpadam ICTT was designed to cut India’s dependence on neighbouring hub ports such as Colombo, Singapore, Salalah, Jebel Ali in Dubai and Tanjung Pelepas and Port Klang in Malaysia to send and receive container cargo, thus saving time and costs for exporters and importers.

Colombo port loaded 4.16 million standard containers in the calendar year 2010, an increase of 18.9% over the year earlier. “When India’s export-import trade grows by 30%, Colombo’s container traffic is seen rising by about 20% based on the average trend over the past five years," said P. Narayan, president of the Cochin Chamber of Commerce.

“The customs regime in India is a deterrent to trans-shipment within India. Indian port dues (charges) are high. Finally, and perhaps most importantly, Indian legislation does not permit feeder services between Indian ports on foreign flag vessels because of cabotage restrictions," he said.