Mumbai: Despite the immediate macroeconomic circumstances, oil-to-yarn and retail conglomerate Reliance Industries Ltd (RIL) has linked its fortunes to what it believes to be the bright future growth cycle for India.

While it is very much in keeping with its tradition of discovering a new growth cycle nearly every five-six years for the last three decades, it may yet be the riskiest bet given the lengthening shadows over the global economy and an uncertain domestic political environment that has roiled policymaking. 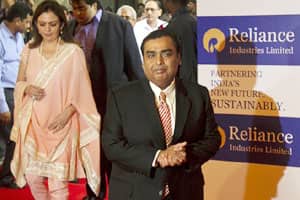 “We believe that India is poised to be one of the growth engines of the global economy over the next decade. Its demographics, talent pool and a democratic society give it a unique position among emerging countries globally," Ambani added.

The big question is, however, whether investors, who lately have been voting with their feet, restless over the rising pile of cash reserves and shrinking profits in the company and tired of the policy paralysis that has afflicted the Union government, will endorse RIL’s latest bet. They have been used in the past to superbly timed business investment decisions that had regularly set the company on a new growth cycle and lately on rapid growth in sync with the unprecedented growth trend in the Indian economy. Each new growth cycle came as the earlier capex cycle started generating lots of free cash flow.

In the 1970s, the company was launched on a plan to compete in textiles, which later morphed into production of polymers in the early 1980s, and a few years later into the petrochemicals business. Thereafter, in the mid-1990s, the company developed verticals by going into the exploration of oil and gas, before taking the big bet on telecom and information technology—subsequently hived off when the company was split up between the two Ambani brothers.

“RIL may be looking at new avenues of growth that are consumer focused since it has to deploy the significant amount of surplus cash it has, and further growth opportunities in the oil and gas and refining businesses are limited," said Shishir Bajpai, senior vice-president at IIFL Private Wealth Management. “It is too premature to say whether these new investments will fructify. Ambani has the vision and he is delivered on past projects. There is risk, but the amount of investment made so far isn’t too high compared to the company’s overall balance sheet."

Ambani’s demeanour at the AGM indicated that the recent criticism of the company had begun to get to him. Usually a picture of calm, an emotional Ambani, clad in a black suit with a red-and-white check tie and accompanied by his family, defended the company’s strategy for future growth and sent out a strong message to the critics.

Some shareholders present at the meeting echoed some recent investor concerns about RIL’s ability to arrest the fall in gas production and improve output from its D6 reservoir in the Krishna-Godavari basin, investment into so-called non-core businesses such as media, and the company’s declining stock price. Fears of lower-than-expected gas output from D6 have also landed RIL in trouble with regulators such as the oil ministry.

“It is very easy to sit there and criticize, but I think the very fact that we have found gas in the Krishna-Godavari basin after 30 years should not be undermined by anyone," Ambani said. “I am confident that our young engineers will deliver, and we should appreciate and support them. I expect you (shareholders), me, my entire board and the country to support them," he said while responding to the observations.

Earlier, in his opening remarks, Ambani said RIL was targeting a sustained gas production of 60 million standard cubic meters per day in the next three-four years.

A senior RIL executive who works closely with Ambani stated that though rare, he has seen Ambani get upset earlier, especially when the company and its employees were criticized. “He doesn’t care about personal attacks, but he feels for the company and especially the young employees when they are targeted," this executive said, on condition of anonymity. “He may have also wanted to send a strong message to his employees, especially those working towards improving D6 output, that the top management was firmly behind them."

Throughout his 20-minute speech, Ambani defended RIL’s diversification plan, including investments in the consumer economy. “These new investments, on the back of a robust balance sheet, will create new waves of growth and value for Reliance," he said.

After traversing the entire energy chain from hydrocarbon exploration to producing petrochemicals, RIL has invested in new businesses such as retail (which it commenced around five years back), high-speed wireless broadband and financial services. It has also made equity investments in other companies such as hospitality firm EIH Ltd, and in banks and financial institutions. While businesses such as fourth-generation (4G) wireless broadband and financial services are yet to take off, the retail arm is still posting losses, albeit narrowed, year-on-year.

The RIL chairman stressed that this was in line with the company’s founder and his father Dhirubhai Ambani’s strategy of investing in the future and reiterated that company will continue to put money in these ventures.

He expressed disappointment that some shareholders, despite being associated with the company for a long time, did not understand his late father’s philosophy and said that if RIL did not invest in forward-looking businesses, it would have remained a textile company.

Citing the benefits of the expansion across the full value chain, Ambani said, “We are now building the chain of consumer businesses. Across the world, the top value generators are energy companies and consumer companies. In India, we have the unique opportunity to create this new consumer business in 10 years in retail and digital services. All our investments will stick within these two (segments), and I want to assure each and every one of you that we do not have unrelated focus."

In his address to shareholders, Ambani said RIL aimed to invest ₹ 1 trillion across its various businesses in India over the next five years to build a “stronger and more diversified Reliance".

“We can achieve this growth while maintaining our financial strength. I have set myself the target to double the operating profits of your company in about five years," Ambani told investors.

However, some were sceptical.

S.P. Tulsian, a Mumbai-based independent stock market analyst, found the company’s 2011-12 annual shareholders’ meet a routine affair that saw a vision statement from the chairman for the next few years without much specific clarity on current concerns.

“The statement of sourcing five new varieties of crude to boost refining margins and the fact that they have accelerated the share buy-back programme were slight positives," Tulsian said.

“There was not much clarity on the cash surplus apart from the assurance that the cash will be invested in various businesses and the projects," A.K. Prabhakar, senior vice-president of equity research at Anand Rathi Financial Services Ltd, said in a note on Thursday. “There was no talk on the telecom business front in terms of any plan roll-out going forward...and overall not much could be interpreted from the AGM."

According to Ambani, the next wave of opportunity will emerge in the consumer economy and in meeting the needs of a rapidly urbanizing and growing Indian economy. While he did flag macroeconomic risks of high inflation, adverse foreign exchange movements, continuing state subsidies for petroleum products and a slowdown in overall growth, Ambani was convinced the country will realize its “latent potential for economic growth, opportunities for investments, and untapped entrepreneurial energies".

With India poised to become a hub for automobile production in this part of the world, Ambani said this is opening up as an opportunity for elastomers—RIL is building a new global-scale business in the material—used in the manufacture of tyres and automobile accessories.

At the same time, increased urbanization, rising aspirations of consumers and their higher disposable incomes, Ambani said, have led to the transition from “need-to-have" products to “nice-to-have" products. “This will create new and sustainable demand for products, particularly plastics, fibres and chemicals, in the areas of agriculture, housing, retailing, infrastructure, apparel and automobiles," he said.

Not surprisingly, Ambani dwelt at length about the company’s retail operations, perhaps more so than ever. The RIL chairman said he expected revenues from the retail business to grow five-six times and achieve ₹ 40,000-50,000 crore over the next three-four years.

Another senior RIL official, who spoke after the meeting on condition of anonymity, said the company was in the process of building a ready-to-eat food factory in Kurkumbh in Maharashtra. The unit, which will come up in partnership with another firm, will manufacture food that can be heated in a microwave, such as pasta and sandwiches, and will market them through retail outlets of Reliance and others. The plant will start output in a few months, the official said.

Shareholders raised concerns about the fact that the company hasn’t yet rolled out 4G broadband services despite acquiring Infotel Broadband Services, a company that won pan-India 4G spectrum in 2010.

This official said the broadband roll-out was taking a bit longer since RIL has decided to build the back-end infrastructure in the form of telecom towers and an optical fibre cable network rather than acquiring or leasing it from existing providers.

“It will be cheaper for us to build this network organically since the valuation and rentals for such assets are unviable at present. If we can bring down the cost, we can pass on the benefit to the consumers as well," the official said. “We have built it once when we rolled out telecom services in 2002, and we can do it again."

Ambani, who completed a decade as RIL’s chairman after stepping into his father’s shoes following the latter’s demise in July 2002, said that in his 35 years of association with the company, he was used to people being cynical and negative, and recounted how in the 1980s many thought “Reliance was a bubble".

“I respect everyone’s views, but you know what Reliance is today," Ambani said.