The coming months, though, hold the promise of slowing economic growth, high inflation and global uncertainties, and these, coupled with a weak monsoon, may shrink demand and reduce the ability of companies to hike prices further, robbing India’s consumption growth story of its sheen. 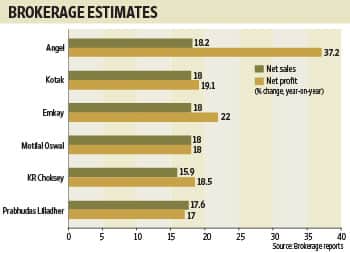 Although revenue and profit growth will have slowed marginally from the preceding quarter, it will still be in double digits, driven by a mix of price hikes and volumes, the brokerage firms said.

“We expect our consumer universe to post close to 18% revenue growth and 18% net profit growth in the first quarter of fiscal 2013," said a July 2012 report by Motilal Oswal, referring to the year-on-year numbers. Revenue grew 19% and net profit 22% in the January-March period on a year-on-year basis.

The brokerage firms expects operating profit to have grown 20% in the April-June period on the back of sustained revenue growth and softening input costs.

C.K. Ranganathan, chairman and managing director of CavinKare Pvt. Ltd, the maker of Chik, Meera and Nyle shampoos, said, “The pressure on (April-June) margins was relatively lower as commodity prices have cooled down and we have been taking price hikes in the last few quarters."

HUL—the maker of Lux, Lifebuoy, Rin and Surf—increased prices of soaps and detergents by 4-6%. Marico hiked the price of Parachute Advansed Hot Oil by 5%, Parachute Advansed Cream by 6% and Saffola Oats by 6%, while Dabur India Ltd raised prices across its toothpaste brand Meswak by 1-2%, honey by 7%, Lal Tail by 3-4% and Real Juice by 3-4%.

During the April-June quarter, prices of several raw materials such as wheat, barley, coffee, cocoa, palm oil, copra and soya bean declined on a year-on-year basis. Palm oil and coconut oil prices fell by 14.3% and 37.5%, respectively, while wheat and barley prices declined by 5.9% and 8.2%, respectively, from the year ago.

“This is expected to boost the gross margins of fast-moving consumer goods (FMCG) companies. Although the fall in crude oil has resulted in a considerable drop in the prices of crude-related raw materials, there will be only moderate gains in rupee terms due to the steep rupee depreciation against the dollar," said an Angel Broking results preview report.

Still, the companies cannot take growth for granted with the macroeconomic environment changing.

India’s consumption growth is slowing, Nikhil Vora, managing director of IDFC Securities Ltd, said earlier this month. “The consumption growth rate has slowed down by 2-3 percentage points from 10-11%, but is still strong at 7-8%," Vora said at the launch of a report on nationwide consumption.

India’s monsoon accounts for 70% of overall annual rainfall. This year, in the 1 June-13 July period, rain has been 23% below the 50-year average, according to the nation’s weather bureau, a Bloomberg report dated 13 July said.

“The impact of a weak monsoon will be felt more in the well-penetrated segments of soaps, detergents and shampoos, which have a large rural exposure," said A. Mahendran, managing director at Godrej Consumer Products, the maker of Cinthol soaps and Hit insecticides.

The need for price hikes persists as “input costs are yet not absorbed in full", said P. Ganesh, chief financial officer (CFO) at Godrej Consumer Products, while pointing out that the drop in prices of imported inputs such as crude and palm oil are being offset by a weaker rupee. The Indian currency has, albeit, been strengthening of late.

Godrej Consumer Products has raised prices by about 10% over the last one year.

Emami Ltd, the maker of Sona Chandi Chyawanprash and Boroplus, which has a large rural exposure, expects sales to remain in line with expectations.

“In the past also, during turmoil, the fast-moving consumer goods sector did well and so far our sales have been in line with our expectations," said N.H. Bhansali, CFO at Emami.

BSE’s FMCG index outperformed the benchmark Sensex by 11% and posted an absolute return of 11.1% in the April-June quarter.

Asian Paints Ltd posted the highest return of 19.9%, followed by Godrej Consumer Products and ITC Ltd, which gained 19.6% and 14.1%, respectively. However, Britannia Industries Ltd (down 11.4%) and Nestlé India Ltd (down 2%) underperformed the Sensex during the quarter.