Silicon Valley techies fight to save an illegal haven

Silicon Valley techies fight to save an illegal haven

Mountain View, California: Hacker Dojo is equal parts shared office, lecture hall and after-hours salon for a variety of tinkerers, software coders and entrepreneurs who intend to reinvent the future. The idea for Pinterest was cooked up here. The makers of Pebble watches used the space as their West Coast headquarters.

Today, however, it is threatened with extinction. City officials in Mountain View have ordered Hacker Dojo to comply with city regulations for offices or move out.

And so the inhabitants of the cavernous warehouse in a city of office complexes have found themselves scrambling to raise money, not for their start-ups, but to save their start-up space. A Kickstarter campaign to raise money will expire on Friday. (Contribute $256 and get “a box of hacker stuff".) They have already held a charity run through Mountain View —in their underwear. A continuing charity auction offers, among other things, sex advice and financial tips for start-ups. 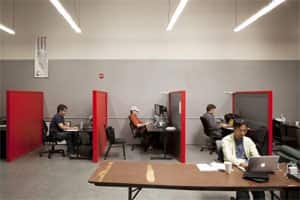 The interior of the Hacker Dojo, a warehouse that serves as an informal office building for the tech-enamoured, in Mountain View, California. Photo: Peter DaSilva/NYT

Some shared offices are upscale, providing on-site bookkeepers and full-service cafes. And then there are hacker spaces like this, with distinct identities of their own. Noisebridge in San Francisco calls itself a “space for artistic collaboration and experimentation"; Ace Monster Toys in Oakland offers a laser cutting machine.

The Dojo is among the largest and fastest-growing of these shared hacker spaces. It has leased 13,000 sq. ft of abandoned warehouse, although it is currently permitted to use barely two-thirds of it. You will find the usual office supplies: staplers, printers and a copy machine.

But in the pink-painted electronics room, you will find a brand new 3-D printer and trays full of diodes and silicon chips. Perks also include a bike rack, high-speed Internet, a cabinet of cellphones on which to test out applications and, on evenings and weekends, classes on things as diverse as patent law and machine-learning.

Inside, Tim Sears is building a mobile application to let consumers compare grocery store prices. V.S. Joshi has spent the day at a library table upstairs, refining a Facebook tool for dating. At sundown, Chris Agerton ambles in; he is designing what he calls a “wearable polygraph test".

The Dojo charges members $100 a month.

“We pride ourselves on our community," said Katy Levinson a robotics engineer who now works full time to raise money for the Dojo. “It’s more fraternity dues than rent."

The warehouse used to be a stained-glass factory, and some of the old samples still shimmer on the walls. What it does not have, according to city officials, are things that would make it an office. It doesn’t have enough fire exits, sprinklers or wheelchair-accessible bathrooms, as required by city regulations.