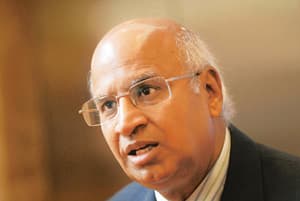 Chasing dreams: TCS’ Ramadorai says the firm wants to be part of every mission-mode project that will come on the radar. Abhijit Bhatlekar / Mint

India currently accounts for 10% of the firm’s revenues, said Ramadorai, who retires on 5 October.

The company considers large enterprises to be the most important opportunity to expand business, followed by the Union and state governments, Ramadorai told Mint. The government contributes around 40% of TCS’ local business, he said.

“We certainly want to be part of every mission-mode project that will come on the radar, whether it is for taxes or excise or passport or even green computing," Ramadorai said, adding that the government is talking about 25 to 30 so-called mission-mode projects and the firm is chasing three to four deals from the Indian government right now.

The government has plans to spend around $6 billion in 30 of these critical projects, as the Union and state governments move towards e-governance for many administrative aspects that range from managing land records to filing taxes.

On hiring, TCS will start recruiting from around the third to fourth quarter of this fiscal year around 18,000 university graduates it has made offers to, Ramadorai said. “More or less, these 18,000 will become part of the TCS mainstream by end of this financial year," he said.

On the multi-year, multimillion dollar contract from BP Plc., Europe’s second-largest oil company, Ramadorai said that TCS expects to earn revenue of between $30 million and $100 million a year. Earnings from the contract would begin to accrue from the third quarter of the fiscal year to 31 March, Ramadorai said.

Why Q2 GDP estimates must be interpreted with care

Mint Explainer: How the world of cryptos unravelled

Mint explainer: How allies' support to US tech curbs on ...

Air India and SIA will jell very well, but they can jar too

On mergers and acquisitions, Ramadorai said that TCS was not looking at acquisitions proactively “but that does not mean we will not look at opportunities that come our way." On the economic downturn, Ramadorai said there was a recovery taking place. “From our perspective, the current economic situation has changed, the drastic downturn has been left behind. The situation is likely to get stabilized in the next few months and it’s not in a downward spiral for sure," he said.

“Areas like banking, financial services, retail, life sciences, utilities seem to be stabilizing and looking up slowly," Ramadorai said, adding that manufacturing and telecom were sectors that still need to be watched.

Ramadorai will continue as a non-executive board member at TCS after 5 October, contributing in areas such as strengthening the TCS brand, as well as contributing to other Tata companies in the telecom and technology sectors, including the Tata Sons Ltd supercomputer project, “which is like a start-up today".