Mumbai: Auto finance has become cheaper as the credit crunch has eased, and public sector banks are aggressively pushing car loans, but many buyers are still fighting shy of borrowing, digging into their own savings instead.

Auto makers and lenders cite factors ranging from the debt aversion of the rural rich to more cash in the hands of city consumers to explain the phenomenon in a country where automobile sales have traditionally been driven by the availability and cost of credit. 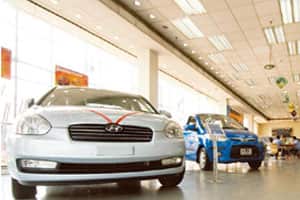 At Hyundai Motor India Ltd, the second largest car maker in the country, the countryside accounted for 28-29% of sales in the eight months to August, up from 20-21% in the corresponding period last year.

Following rising loan defaults and a credit crunch in the aftermath of the global financial crisis that peaked in the third quarter of fiscal 2009, private sector banks such as ICICI Bank Ltd, HDFC Bank Ltd and Kotak Mahindra Bank Ltd had cut down on car loans. Traditionally, these three banks accounted for a large chunk of auto loans.

Private sector banks’ share in financing auto sales fell from 50% in the June 2008 quarter to 30% in the December 2008 and March 2009 quarters, said Joseph George, an analyst at BNP Paribas Securities India Pvt. Ltd, in an August report.

When interest rates were high last year ahead of the global financial meltdown, cash sales went up to 35% for cars and 85% for two-wheelers. Even after interest costs declined by 2 percentage points and the availability of loans improved, cash sales continue to be at the same levels, said Ashok Khanna, executive vice-president and business head of auto loans at HDFC Bank. “One-and-a-half years back, before the recession had set in, this used to be 10% for cars and 50% for two-wheelers."

Maruti Suzuki’s Srivastava and a senior Hyundai Motor executive corroborated this. Maruti’s sales of cars purchased with cash have risen to 33.8%, up from 26% in fiscal 2007 and 33.5% in fiscal 2008, said Srivastava.

Arvind Saxena, senior vice-president, sales and marketing, at Hyundai Motor, said under 30% of the cars sold by the unit of South Korea’s largest auto maker used to be bought with cash until 2007. The proportion rose to 35% in 2008 and continues to be at the same level.

Moreover, a drop in the rate of interest on bank deposits from 9-11% last year to 6-7% is possibly discouraging savings and the cash is being used to fund big-ticket purchases, said Sandeep Bafna, a Mumbai-based dealer of Hero Honda Motors Ltd and Maruti Suzuki.

But all financiers don’t agree with this thesis. Shyam Mani, managing director at Tata Motorfinance, the non-banking finance arm of Tata Motors Ltd, said cash purchases of cars have gone up, but this doesn’t mean financing in general has declined. According to Mani, in many cases the source of finance is not known. People do come with demand drafts from cooperative or public sector banks and many dealers consider them as cash purchases.