Home / Companies / Suzlon&#8217;s windmill empire begins to show some cracks
Back
Share Via

A bit more than a decade ago, Tanti sold his family’s struggling yarn-making business and scraped together about half-a-million dollars to start a new company. Defying industry incumbents who dismissed him as a dreamer, he started building wind-powered turbines.

With lobbying, heavy borrowing and good timing, he turned Suzlon Energy Ltd into the world’s fifth largest windmill maker. Suzlon does roughly $1.8 billion in sales a year and has captured 8% of the US market. Tanti ranks among the world’s richest green-power moguls. 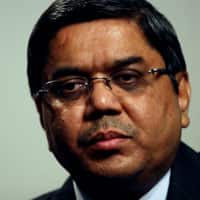 Suzlon has recalled 1,251 blades from its top-of-the-line turbines, which represent the majority of blades the company has sold to date in the US.

Its troubles don’t end there. A year ago, the company bought a controlling stake in a large German turbine manufacturer, Repower Systems AG, in one of India’s biggest overseas acquisitions.

Repower’s technology could improve Suzlon’s current product line. The German company has also developed some of the industry’s biggest turbines, which could help turn Suzlon into a wind-power front-runner.

Now, Suzlon can’t get its hands on the blueprints. Hamstrung by a German corporate law, Suzlon must offer to buy out minority shareholders before it can demand Repower’s designs.

It’s unlikely that the company could make a tender offer until 2009, say people with knowledge of the companies.

Tanti, a 50-year-old with a narrow moustache and slicked-down hair, plays down the concerns.

In an interview, he demonstrates a bold confidence in the technology that has propelled Suzlon this far, and bristles at questions about its challenges.

“There are no companies growing the way we are growing. Within four years we will feed product technology to the whole world," says Tanti, the company’s chairman and managing director.

Suzlon remains on track to double its annual production capacity by 2010, he says. The cracked-blade problem, he says, doesn’t stem from any fundamental design flaw.

He declines to comment on ownership issues at Repower.

Suzlon’s rapid rise reflects the advantages that developing world companies have in some booming new sectors—as well as the trouble they may have staying on top.

Tanti kick-started his company in the late 1990s in part by lobbying a local government for a friendly tax regime. In 2005, he tapped an international appetite for investments in emerging markets and renewable energy to raise capital for an aggressive expansion. He used India’s cheap labour costs to undercut the prices of established rivals abroad.

Tanti was born in Rajkot, an industrial town in Gujarat. After studying commerce and mechanical engineering in the 1970s, he went to work for his family’s cold-storage business.

In the early 1980s, Tanti and his three brothers moved to Surat, a textile centre in Gujarat, and set up a company to make polyester yarn for saris and dresses.

The company’s name, Suzlon, combined the Gujarati word for intelligence and the English word loan.

Suzlon struggled. One big problem, Tanti says, was electricity. India grants agricultural users in some states subsidized or free power, leaving industrial users to bear some of the world’s highest electricity costs. Even so, supply is erratic.

So, Tanti decided to power his factory with windmills. In 1994, he bought two small turbines from Vestas.

But wind power, too, was a headache. Big Western makers weren’t installing and servicing the equipment they sold, making maintenance a chore. Tanti saw an opening: He could build windmills and operate wind farms for Indian factories, which were growing following the country’s 1991 economic reforms.

“Always the ideas come when you are under pressure," he says.

In 1995, he and his brothers raised $600,000 by selling some family property and set up Suzlon Energy near Mumbai.

Tanti had to build from scratch a company that could compete in a highly technical industry. Wind turbines are complicated mechanisms with thousands of parts.

Their immense blades must be engineered to catch wind efficiently but avoid breaking in high gusts.

Suzlon mined troubled European makers for talent and designs. It struck a deal with a small German producer, Südwind Energy GmbH, to sell its turbines in India. When Südwind went bust in the late 1990s, Suzlon hired its engineers and set up a turbine research and development centre in Germany. Around the same time, Suzlon bought AE-Rotor Techniek BV, a bankrupt Dutch company, to design its blades.

“There was tremendous lobbying from the industry," said G.M. Pillai, former head of the Maharashtra Energy Development Agency, the state body that sets policy for renewable energy. “Suzlon was a mover," Pillai added.

But had it not been for the tax break, he says, “I am not sure whether we would have gone ahead."

But the tax break caused an outcry in the local media, because it effectively reduced the flow of money into public coffers. The state repealed it in 2002, Pillai says. Tanti looked for opportunity abroad. In the US, where tax credits boosted wind-power demand, producers were behind on turbine orders.

In 2003, Suzlon sealed its first US deal, selling two dozen 1MW turbines—each capable of powering about 650 US households—to a Minnesota developer.

Foreign investors were drawn to Suzlon, which offered exposure to both India’s booming stock market and the promising renewable-energy sector.

When global stocks sagged later that year, Citibank worried that Suzlon was taking on risky levels of debt to ramp up production, says Ajay Relan, who heads Citibank’s private-equity business in India. He recalls suggesting that Tanti sell Suzlon to a rival.

Tanti countered that within a few years, Suzlon would be buying the leading European companies, Relan recalls.

By 2005, foreign money was pouring into India’s stock market. Suzlon was meeting sales targets and, because of low manufacturing costs, had profit margins of more than 20%, compared with the industry average of 8%. Later that year, Suzlon raised $340 million in an initial public offering (IPO).

Citibank sold a majority of its stake in the IPO, and expects to make a $1 billion profit in all from its Suzlon investment.

Tanti became one of India’s richest people overnight. The extended Tanti family owns about 66% of the company, worth about $11 billion at the stock’s height earlier this year and more than $7 billion currently.

Tanti owns about 16% of Suzlon, according to the Bombay Stock Exchange (BSE).

To compete in developed markets, Suzlon needed bigger and more efficient turbines than those it had sold in India. Its German R&D centre designed the company’s biggest model yet, a 2.1MW turbine. Its blades, measuring nearly 50 yards from hub to tip, were the company’s most technically demanding to date.

Suzlon’s main factory is in the former French enclave of Pondicherry. Executives ride golf buggies between open hangars on the massive palm-tree-dotted site, where some 1,200 employees assemble turbines and mold, sand and paint the giant fiberglass blades. Suzlon also built a plant in Pipestone, Minnesota, to manufacture blades closer to its key US market.

Soon after operations began, blades began splitting, Edison said in its February SEC filing. The company says blade problems may delay new wind-power projects it has under development. Deere and Co., another big US customer, has also seen some of its blades crack, says Suzlon spokesman Vivek Kher. A Deere spokesman declined to comment.

Kher blamed the cracks on the unexpectedly violent changes in wind direction in US’ midwest region. Though Tanti says that only 45 blades have cracked, Suzlon says it will add an extra lamination layer to almost all of the blades it has shipped to the US. To repair cracked blades and reinforce the rest, the company expects to spend $30 million.

Suzlon has been aware for a year and a half that its technology is “not world-class," says Ashish Dhawan, senior managing director of ChrysCapital, a private equity firm that invested in Suzlon before the IPO. ChrysCapital has sold its stake but Dhawan remains an independent director on Suzlon’s board. “It’s not that their technology is bad," he says. “But they’ve been a laggard."

Tanti has sought to close the gap. Last May, Suzlon agreed to take over struggling German turbine manufacturer Repower, which has developed some of the industry’s most advanced wind technology. Its 5MW turbines, among the world’s largest, sit offshore to catch stronger sea gusts.

The deal, valued at $1.7 billion, calls for Suzlon to take over Repower in stages over two years, in part by buying large stakes currently held by two European shareholders, French state-controlled nuclear-engineering company Areva SA and Martifer SA of Portugal.

The two shareholders have granted Suzlon the right to vote their shares, giving the company 86.5% of Repower’s voting rights. But Suzlon’s current ownership stake comes to just 33.6%. By German law, minority owners such as Suzlon are deemed competitors. Repower is under no obligation to transfer its technology until Suzlon is able to complete a so-called “domination agreement" that requires, among other things, that Suzlon also offers to buy out minority shareholders who control 13.5% of Repower’s shares.

Suzlon’s challenge, say analysts and people familiar with the company, will be to fund its latest aggressive expansion plans and its buyout of Repower’s large shareholders, as well as raise funds to compensate minority shareholders.

Meanwhile, according to those familiar with the company, a frustrated Tanti and his top executives have shuttled to Repower’s Hamburg headquarters repeatedly in recent months, trying to persuade Repower to license its technology to Suzlon. In late January, the vice-president of Suzlon’s Netherlands-based design unit asked Repower for the blueprints for two of its blades, according to an email reviewed by The Wall Street Journal.

Mindful of exposing itself to complaints by minority shareholders, Repower has declined Suzlon’s requests. “We’re not sure we want to give (the technical know-how) to a competitor," said Thomas Schnorrenberg, a Repower spokesman.

Tanti says he’s managing Repower at arm’s length and that there’s nothing wrong with seeking licenses for its technologies.

In spite of the headwind, Suzlon’s sales have continued to grow. Its unconsolidated revenue in the last quarter of 2007 totaled $410 million, up 50% from the year before.

But Suzlon’s shares, listed on BSE, have fallen 34% since its early January high, compared with a 21% fall in the market’s benchmark Sensex index during the same period.

Dhawan, the board member, says it’s unclear how Tanti’s aggressive expansion and ambition will play out. “There’s a risk with Tanti," he said. “It’s going to be a huge success—or it’s going to blow up."