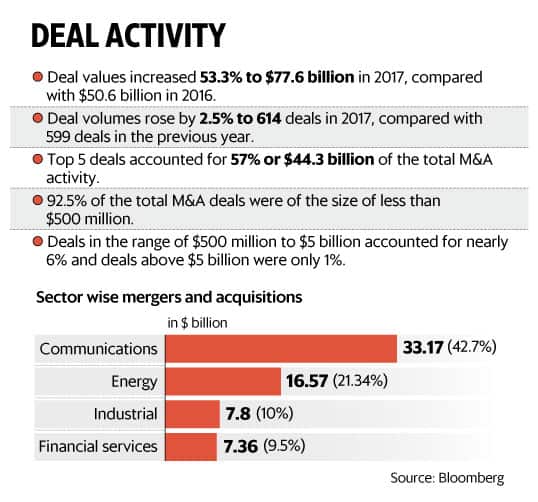 In terms of deal type, cross-border transactions accounted for nearly 58%, with a combined value of $45 billion across 235 deals.

While buyouts accounted for 42.6% of deals with a $33 billion valuation, additional stake buys accounted for 24.7% share and $19.2 billion in value. Industry experts believe that while the deal momentum will continue in 2018, there will be several factors to watch out for.

“First, the focus will clearly be domestic markets, unlike overseas acquisitions. The India growth story has never been so attractive and is requiring greater capital allocation; remaining focused on India is clearly on top of the agenda for most corporates," said Ajay Garg, managing director and founder of Equirus Capital.

“The competition for most M&A deals will be private equity investors, who have an attractive proposition for the existing management team in terms of options/equity upside," said Garg.

“Also, regulatory approvals is a big factor in any M&A strategy, starting from Sebi (Securities and Exchange Board of India) wanting to ensure minority shareholders are protected, Competition Commission approval and all sectoral regulators looking at which sort of players and resultant business models emerging, we are going to see far higher timelines and uncertainty for M&A transaction consummation," Garg added.