Kolkata: Rajendra Singh Lodha, 66, chairman of Birla Corp. Ltd who is fighting a court battle with some members of the extended Birla family over the estate of Priyamvada Birla, died in London following a heart attack. He was visiting B.K. Birla, head of the eponymous BK Birla group, in his flat in London.

“It is a very big shock for us," said Birla. “He (Lodha), and my son (the late) Aditya (Vikram Birla) were good friends. Our relationship goes back some 50 years."

Lodha, who was one the executors of Aditya Vikram Birla’s will, had named his first son after his friend. Second son Harsh Vardhan was with him at the time of his death.

The relationship hit a rough patch in recent years after the death of Priyamvada Birla, widow of M.P. Birla. 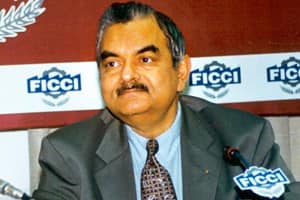 Sudden demise: A file picture of R.S. Lodha, who died on Friday.

Describing Lodha as “a good, nice, intelligent and hardworking man", Birla said, “The (pending) court cases are not important any more." He was referring to his family’s opposition to Priyamvada Birla’s will naming Lodha and his younger son Harsh Vardhan as her successor.

In 2004, the Birla family had moved the Calcutta high court challenging the will. The will gave Lodha complete control of the MP Birla group, which has diverse business interests ranging from cement to cables. In 2004, it was valued at around Rs5,000 crore.

Lodha, who was a chartered accountant by profession, had always been close to the Birla family. His firm Lodha and Co. was auditor of a large number of Birla companies, but he fell out with the Birlas after Priyamvada Birla bequeathed her estate to him. A bitter legal battle started between Lodha and the Birla family, which is pending in several courts in Kolkata and elsewhere.

In the will, Priyamvada Birla had said Harsh Vardhan Lodha would inherit her estate after his father. Though the will, written and registered in 1999, has not been granted “probate" —or the stamp of authenticity by courts—the Lodha family is firmly in control of the M.P Birla group. After Priyamvada Birla died, Lodha had become chairman of the group.

Lodha family’s lawyer Debanjan Mandal of Fox and Mandal could not be contacted because he was travelling. Lodha’s sons, too, could not be contacted. Lodha, who lived in Kolkata with his sons, has been an independent director on the board of State Bank of India, the country’s biggest bank.

He was also a good friend of Lakshmi Niwas Mittal, and was on the board of the steel baron’s privately held companies.