The year saw increased buyouts and high activity in sectors like infrastructure, realty

Deal-making in 2018 was one for the record books. All previous records were broken by crossing the $100 billion mark in terms of deal value across both private equity (PE) and strategic (M&A) transactions. India proved to be an investor magnet, attracting close to $35 billion during the year by way of private equity, which has now clearly entered a phase of maturity led by a steady stream of investments, record levels of exits and mounting levels of dry powder. There were some discernible trends:

Buyouts by PEs were a dominant theme of 2018, with the total value of buyouts crossing the $5 billion mark for the first time ever, doubling from last year. The trend underlines the growing appetite among PEs for control transactions in India and to ensure better hold over their portfolio companies, driving decision making, strategy and corporate governance. Meanwhile, the trend is also indicative of increasing willingness among Indian promoters to cede control to a financial partner to push business growth.

The implementation of the insolvency and bankruptcy code (IBC) and the learning from the resolution proceedings of the first 12 non-performing accounts, have piqued the interest of several foreign and domestic distressed asset funds and strategic investors. Funds such as Bain Capital Credit has struck a partnership with Piramal Enterprises Ltd to form India Resurgence Fund, which is focused on distressed assets. Similarly, Aion Capital and JSW Steel were able to clinch Monnet Ispat and Energy Ltd by bidding together as resolution applicants. Aditya Birla Group in August announced an equal joint venture between Aditya Birla Capital and US’s alternative assets manager Varde Partners to invest in distressed opportunities in India. Going forward, most resolution experts and investors believe that a lot of M&As will be driven by distress, especially ahead of the asset going formally for resolution under the IBC.

One of the year’s biggest PE deals was Macquarie buying out toll operate transfer (TOT) road assets auctioned by the National Highways Authority of India (NHAI) for $1.4 billion in March. The deal activity in the sector has primarily been driven by government selling operating assets to investors with operations and management (O&M) experience, unlike earlier, when engineering, procurement and construction firms with limited O&M experience were asset owners.

“Infra has definitely made a comeback this year, which is largely because of the government offloading assets. The big global firms such as Macquarie, CPPIB, Brookfield and PSP, among others, have shown the appetite to acquire good quality assets, prompting some of the large infrastructure deals this year," said Vivek Soni, partner and national leader, private equity services, of consultancy EY. “For the seller, i.e., the government in most cases, funding future capital expenditure needs by selling the economic rights of existing infrastructure assets to the highest bidder appears to be the driving factor here."

Driven by the Real Estate Regulation Act (RERA), real estate has seen increased private equity interest, both from domestic and foreign funds. “Real estate has seen a lot of deals this year, but these have been more of structured credit/credit as opposed to pure play equity. RERA and demonetization has cleaned up the sector significantly and with residential sales slowing down, unsold inventory has risen to all-time high, constraining developers for funding options," said Soni. 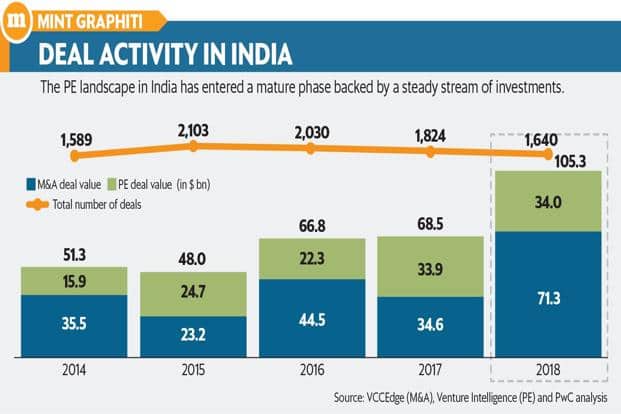 India attracted interest from very deep- pocketed and long term institutional investors, particularly Canadian pension funds which took the center stage. Sample this: Canada Pension Plan Investment Board (CPPIB) has committed over $5 billion in India till date. Along with sovereign funds like GIC and Temasek, such funds are emerging as prominent long term investors, particularly in real estate and infrastructure. “Earlier, funds like CPPIB were investing along the yield curve. Now they are taking significant minority positions. Stressed assets from the NCLT under the IBC are also a huge opportunity for these funds, and are driving their India ambitions," said Sanjeev Krishan, leader-deals at PwC India.

A rise in platform plays

Platform plays- acquiring a company when investing through acquisition in a new industry or market space by a PE as a starting point for follow-on acquisitions in the same area have been a dominant theme this year. “Platform plays have attracted a lot of private equity funds and others, including sovereign and pension funds. It is a good way to scale up, and renewable and infrastructure companies have been looking at is as well," said PwC’s Krishan. “Several PE Funds like Warburg Pincus, Goldman Sachs, Everstone etc have demonstrated a lot of interest in creating new platforms," said Soni, adding that PE backed platform plays makes a lot of sense in fragmented and capital-heavy sectors like warehousing, trucking, logistics and financial services. For instance global PE firm KKR has been backing Radiant Life Care Pvt Ltd in acquiring Max Healthcare as part of its platform strategy. Similarly, Global Infrastructure Partners has all its infrastructure investments clubbed across various platforms like roads, telecom towers, renewable. Platform play allows PE firms greater flexibility during deployment and investing in scattered assets meanwhile simultaneously allowing them to club all the investments into a bigger pool which can be sold to large PE or strategic investor.