Bangalore: Union government-controlled Jawaharlal Nehru (JN) port has rejected a request from Singapore’s PSA International Pte Ltd for more time to sign an agreement to build a 6,700 crore container loading facility at the port, setting the stage for a face-off between the two.

PSA International, the world’s second biggest container port operator, is fully-owned by Temasek Holdings Pte Ltd, the sovereign wealth fund of Singapore. A concession agreement sets out the terms and conditions of the contract and puts the project in motion. 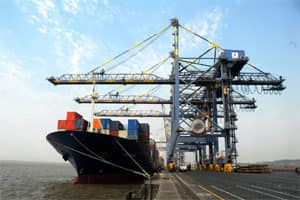 Seeking extension: A file photo of JN port in Mumbai. In a communication sent to PSA on 30 August, JN port had asked the firm to sign the agreement for the project within 10 days, a deadline that ends 10 September. Photo: Mint.

The “action" proposed to be taken by JN port includes encashing the bank guarantee of 67 crore submitted by the consortium for the project. If they quit the project now, the team will also be barred for three years from participating in auctions at Union government-controlled ports, according to qualification rules for port bidders framed by the government in 2007.

In a communication sent to PSA on 30 August, JN port had asked the firm to sign the concession agreement for the project within 10 days, a deadline that ends 10 September.

PSA responded by asking for more time to sign the agreement besides requesting the government’s intervention to sort out the issue over payment of stamp duty, the port spokesman said.

“They were supposed to sign the concession agreement within 30 days of getting the letter of award (26 September 2011) for the project. They have delayed this indefinitely. Now, they should sign the agreement by 10 September or face the consequences," the JN port spokesman said. The concession agreement was originally slated to be signed on 11 January this year, but was called off indefinitely over a stamp duty issue. PSA said it would not bear the cost of stamp duty for registering the document in Maharashtra where the port is located.

Significantly, the model concession agreement finalized by the government in 2007 clearly says that all statutory dues including stamp duty for registering the document will have to be paid by the private firm that builds the cargo loading facility.

The delay in implementing the project has raised its cost to 8,000 crore, JN port chairman L. Radhakrishnan, said on 18 May.