Tokyo: An independent panel issued a damning report on a $1.7 billion accounting scandal at Japan’s disgraced Olympus Corp on Tuesday, urging legal action against the executives responsible for the cover-up and the replacement of other board members who knew.

The six-man panel of experts found no link with organized crime, however, an outcome that may help the 92-year-old maker of cameras and endoscopes remain listed on the Tokyo stock exchange and survive a scandal that ranks among Japan’s worst. 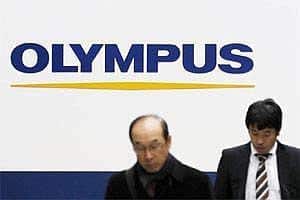 “The core part of management was rotten and the parts around it were also contaminated by the rot," the panel said in its report, which was commissioned by the company and ran to more than 200 pages.

“In the worst possible sense, the situation was that of the tribal culture of the Japanese salaryman," it added, referring to a culture of absolute corporate loyalty.

The panel also criticized the external auditors who signed off on the books of the once venerable company.

Olympus has lost about half its market value since Woodford, an Englishman, was sacked in mid-October and went public with his concerns over murky accounting and some expensive and questionable acquisitions.

Speculation of “yakuza" gangster involvement had quickly surfaced as criminal outfits have a history of trying to extort money from Japanese companies by threatening to expose their secrets, and because Woodford had fled Japan, saying he feared for his safety.

Doubts persist over whether the panel, headed by a former Supreme Court judge, had the expertise or authority to dig into gangster involvement.

“That’s really up to the police," said Jamie Allen, secretary-general of the Asian Corporate Governance Association, whose members include institutional investors who collectively manage assets of more than $10 trillion.

The panel blamed two former executives for cooking the books over 13 years to flatter the company’s financial performance, and said three ex-presidents had known about the scheme.

It found no evidence to suggest any executives personally profited from the scandal.

“A factor in the longevity of the cover-up was the existence of external players who advised, helped and assisted in the concealment while knowing full well that such accounting practices were illegal," the report said.

It said the company as a whole was not involved, adding: “Olympus must take this opportunity to extract the tumour that centres around its former management group, and literally aim to renew its body and soul."

Olympus will set up a special committee and “begin pursuing the responsibility of those involved," senior management told employees in an internal memo obtained by Reuters on Tuesday.

The current president, Shuichi Takayama, has said he was ready to take legal steps, including filing criminal complaints, against those found to be at the root of the scandal.

The panel said former executive vice president Hisashi Mori and ex-internal auditor Hideo Yamada had crafted a scheme as long ago as 1998, along with investment bankers, to hide investment losses suffered earlier in that decade.

It was also critical of Olympus’ auditors over the years under investigation, KPMG AZSA and Ernst & Young ShinNihon, and said the concealment of losses amounted to ¥134.8 billion ($1.73 billion) at its peak.

It listed 10 main reasons behind the scandal, ranging from bad personnel management to incompetent external auditors, but put the blame squarely on the executive management, which it said lorded over operations with no accountability.

“Past (Olympus) presidents had low esteem for transparency and governance, and standing up to them to speak the truth meant you risked being put out to pasture, which is apparent from what happened to Woodford," the report said.

The report drew a picture of how Olympus - like many blue chip Japanese firms faced with a strong yen - made risky “zaitech" securities investments during the heady days of Japan’s late 1980s “bubble economy" of soaring asset prices, only to be left with huge losses when the bubble burst.

The company then embarked on an elaborate money-shifting scheme to hide those losses, using a myriad of bank accounts, funds and special purpose vehicles in Japan, Singapore and Europe, including a “secret M&A" account in Lichtenstein.

Yamada and Mori sought the help of Akio Nakagawa and Hajime Sagawa, the heads of boutique investment firms Axes Japan and Axes America, for overseas deals and paid them a massive advisory fee for acquiring British medical equipment maker Gyrus, circulating the money back through a maze of funds.

Nobumasa Yokoo, a former banker at Nomura Securities, introduced Yamada and Mori to senior personnel at a Lichtenstein bank and helped steer investment into three domestic companies at inflated prices. The fees and high prices were later partly written off as goodwill.

The panel urged wholesale changes in the boardroom, which should please shareholders clamouring for a clean sweep.

But Woodford, who is campaigning to take control of the board by regaining his old post at the head of a new team of directors, said the panel’s report contained nothing new.

He again called for board members to resign immediately and an extraordinary shareholders meeting to be held.

The report “brings home the point that the people sitting running the company at the moment did nothing, which I again find so mind boggling that they are still there," Woodford told Reuters in a telephone interview from London.

“I will be coming back to Japan soon in relation to meeting with shareholders and potential new investors," he added.

Olympus shares had jumped as much as 15% earlier on Tuesday, extending a three-week rally fuelled by growing hopes that the stock would not be delisted.

While the panel’s wording was tougher than expected, its main findings contained no surprises for investors, though some doubts exist about its ability to get to the bottom of such a complex and murky affair, which involves numerous, obscure counterparties and investment firms.

The panel has limited powers of investigation and was hired by the same board that sacked Woodford.

Leading shareholders said they wanted more time to go through the report, but Sumitomo Mitsui Banking Corp, the core unit of SMFG and a main lender to Olympus, said it was “very regrettable" the company had put off booking losses for years.

“We hope Olympus will sincerely accept the independent panel’s suggestions and work hard to strengthen its governance and prevent (any) recurrence (of such an incident)," a spokesman said, adding the bank would continue to support Olympus.

The company remains under joint investigation by Japanese police, prosecutors and the markets regulator, as well as the US Federal Bureau of Investigation and the UK Serious Fraud Office. Tokyo prosecutors and police are now likely to step up their probe, experts say, though it is not clear when the official investigations will wind up.

The company said it aimed to meet a 14 Dec deadline to submit its financial statements for the six months to September, and would hold a news conference at 11.30 am on Wednesday.

Olympus faces automatic delisting if it misses the deadline and may still have its shares bumped off the exchange depending on the scale of its past misreporting.

The Olympus scandal has fanned concerns about lax corporate governance in Japan, and Shinsuke Amiya, a member of a ruling Democratic Party taskforce, told Reuters it was vital to create rules that would satisfy global investors.