Corporate social responsibility spending of 33 firms listed on the NSE rose 22% year-on-year to Rs2,167 crore in fiscal 2016, according to an analysis

Bengaluru: Corporate social responsibility (CSR) expenditure in India is rising, although it’s nowhere near prescribed levels yet, reveals a preliminary analysis of reported data culled from a third of the top 100 companies by market capitalization on the National Stock Exchange.

NextGen, a Bengaluru-based CSR management company, undertook the exercise, with a cut-off date of 8 July, in an effort to understand how the second year of CSR Rules played out, what the early trends are and whether or not the legacy of FY15 continues.

Its preliminary analysis shows that companies partnered with more than 150 non-governmental organizations (NGOs) across 450 projects during the year.

A first look at the CSR spending of the 33 companies shows that when compared to FY15, their spend rose 22% to ₹ 2,167 crore in FY16. Among the lot, information technology (IT) services company Tata Consultancy Services Ltd (TCS) spent ₹ 294 crore and emerged as the biggest spender. ITC Ltd and Infosys Ltd were the other top two spenders. 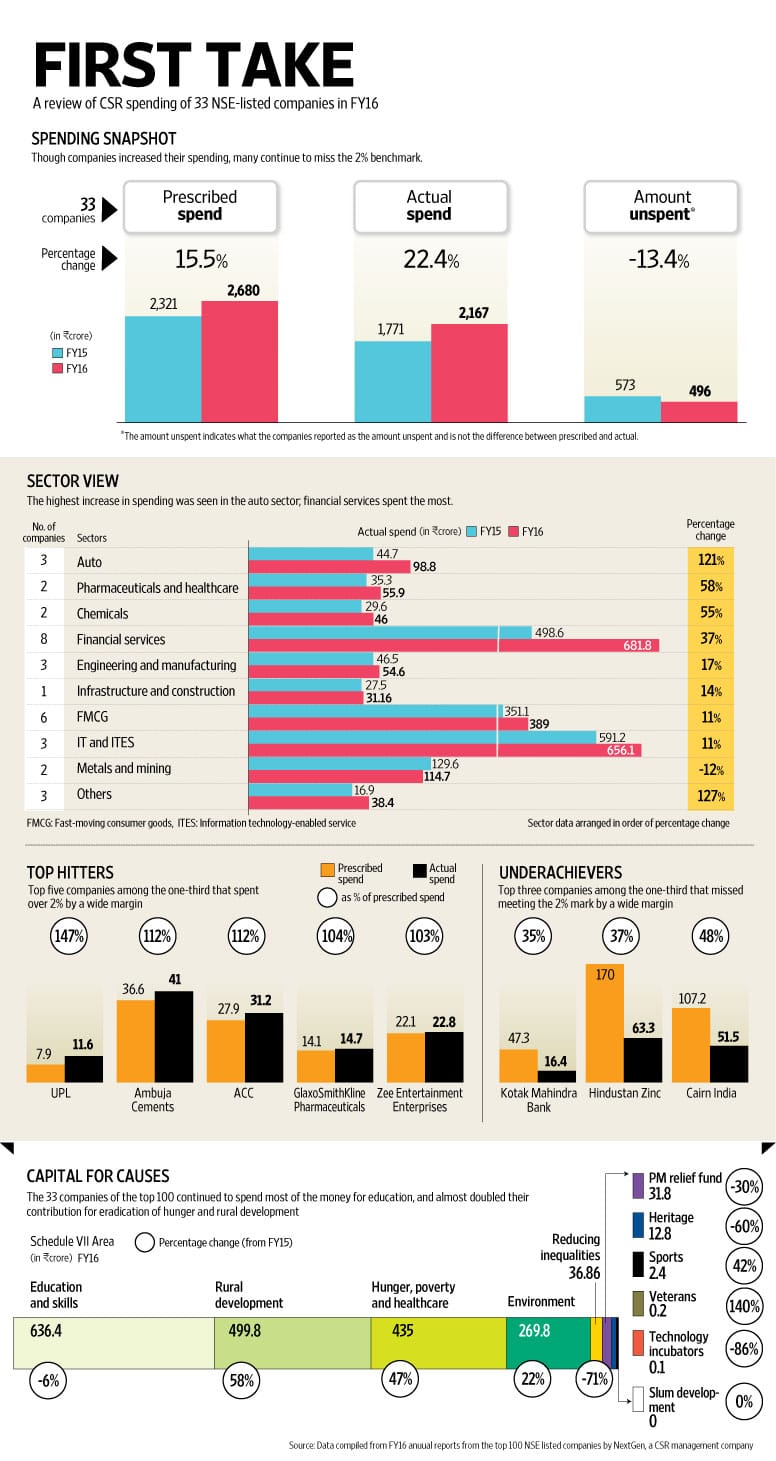 The CSR Rules, 2014, require that companies with a net worth of ₹ 500 crore or revenue of ₹ 1,000 crore or net profit of ₹ 5 crore spend 2% of their average profit in the last three years on social development-related activities. Meeting the 2% mark is not mandatory. But companies that fail to do so are required to give reasons.

Among the three companies mentioned above, only ITC hit the 2% mark, spending ₹ 247.5 crore. TCS and Infosys spent 82% and 79% of their prescribed spending, respectively.

TCS, in its annual report, said that some of its large programmes in the areas of healthcare, education and promoting employability are multi-year projects. Infosys too cited the same reason. The latter was required to spend ₹ 256 crore, but it fell short by ₹ 53.7 crore.

In all, 16 of the 33 companies surveyed did not meet the 2% benchmark. And some, like Kotak Mahindra Bank Ltd and Hindustan Zinc Ltd missed by a huge margin.

Kotak Mahindra spent only 35% of its prescribed amount. Its CSR head, Rohit Rao, said though Kotak Mahindra missed the 2% mark, the bank had been increasing its expenditure over the past three years—from ₹ 3.63 crore in FY14 to ₹ 16.41 crore in FY16.

Rao said one of the challenges for the bank to ramp up spending had been finding credible NGOs with the ability to scale. Also, he said the bank was building its CSR capabilities on a continuous and sustainable basis, and would gradually increase its CSR spending in the coming years.

Hindustan Zinc and Cairn India Ltd, which were among the companies that missed meeting the 2% by the widest of margins, are subsidiaries of Vedanta Ltd. Both the companies spent less than 50% of what they were supposed to.

“Vedanta has a consolidated CSR strategy and the 2% criteria for Vedanta was actually nil for the combined entity (the group has been reporting a loss for the past three financial years). Still, Vedanta has spent ₹ 160 crore towards CSR in various areas like establishment of anganwadis (childcare centres), providing safe drinking water to villages, etc.," said Roma Balwani, president-sustainable development at Vedanta.

Even though the total amount unspent by these 16 companies was ₹ 496 crore, the good news is that they left a lower amount unspent in the last financial year when compared to the previous fiscal, when it was ₹ 573 crore.

The quantum of CSR capital spent by companies has increased by ₹ 350 crore for the 33 companies and the average ticket size has gone up by about 15% as companies are focusing on larger and longer-term projects, said Abhishek Humbad, co-founder at NextGen.

“If a similar trend holds true for all the 15,000-plus companies that come under CSR Rules, then a lot of additional CSR capital was spent last year," he said.

To do this, it exited smaller projects and consolidated its CSR strategy to combat infant mortality, which now accounts for over 80% of its expenditure, said A. Vaidheesh, the company’s managing director.

“It was both a strategic and a mindset shift since we were now looking at projects that had both scale as well as a high investment," he said.

For a company like HDFC Bank Ltd, FY16 was the year it took stock of the geographies it should focus on.

“One of the major changes that we brought about in FY16 was to focus more on rural regions. We were earlier focused on urban and semi-urban regions. So we struck partnerships with 15 NGOs that have an expertise in diverse rural geographies," said Nusrat Pathan, head of CSR at the bank.

The bank has increased it exposure to rural areas to 85%, from 30% earlier, said Pathan.

In fact, the geographical spread of CSR-backed work by companies has been skewed, to say the least, in the last two years.

Among the states, Maharashtra was the most favoured in FY15. In FY16, too, for the 33 companies surveyed, it seems to be the favourite. Since it is a state which houses industries ranging from auto manufacturers to pharma companies, and given that companies usually pick their own backyard for doing development work, Maharashtra ends up with undue CSR attention. In fact, the 33 companies spent ₹ 85.87 crore, which was 132% more than what they pumped into the state last year, in Maharashtra.

States like Kerala, Punjab, Jharkhand and all of the north-east saw very little interest among the 33 companies this year.

Even if companies have the intent, the main hurdle has been getting local support, say CSR heads.

Whether this trend will change or not will be clearer when annual reports of the top 100 companies are examined.

As for the sectors, automotives made a huge leap in spending, nearly doubling it to ₹ 98.8 crore in fiscal 2016, as companies like Eicher Motors began spending on CSR in the last financial year and others like Bajaj Auto nearly doubled their spending to meet the 2% norm.

On the other hand, sectors like metals and mining and financial services sector, which didn’t meet the 2% requirement in FY15, continued to lag even this year.

Even though the financial sector’s spending rose 37% to ₹ 681.8 crore, it still has a long way to go before it meets the prescribed levels. The stress in the sector, which has been weighed down by bad loans, is a probable reason.

Namita Vikas, chief sustainability officer of Yes Bank Ltd, pointed out that banks, in addition to CSR, are also mandated to carry out financial inclusion, which is a responsibility other sectors don’t have. Yes Bank spent 87% of its prescribed CSR allocation.

“We also incur a spend on financial inclusion for creating a socioeconomic impact (40% of balance sheet should be spent on priority sector lending). For that we work with 12 lakh women, educating them on financial literacy, and that is not under CSR," Vikas said, adding that other sectors like manufacturing and IT do not have that kind of additional mandate. “So it is not an apple-to-apple comparison between sectors."

On the whole, experts believe the first two years of CSR have seen companies headed in the right direction.

“Year 2 has been one of consolidation, where companies have looked at sustainability of projects, putting in place better monitoring systems. Moreover companies have shown growth in their spends. So it is only a matter of time before they meet the 2% norm," said Santhosh Jayaram, head of CSR and sustainability at KPMG India.