Fry without fear, it’s not that bad

Let’s figure out exactly what is happening when you fry something. Frying is a ‘‘dry" method of cooking. Don’t scratch your head; it just means it’s cooking without water. Instead, we use fat (chemically quite different from water). Oil has a few advantages. First, it can heat up to far higher temperatures. Water tops out at 100 degrees Celsius (its boiling point), while most oils can be heated up to double that temperature till they reach their smoke point (more on this later). This allows food to be cooked faster. It also allows food to brown, which creates delicious new flavour compounds via the Maillard Reaction (read my previous column on cooking meat for more on this). That happens only at such temperatures. Second, the hot oil dehydrates the surface of the food being fried, producing that crispy texture we all love so much. That hissing sound you hear when food is being fried? That’s water from the food surface boiling off, meeting the hot oil and instantly turning into steam. Lastly, in some cases, oil can also be used to infuse flavour. For instance, Malayalis love their coconut oil, while Bengalis are fans of mustard oil, both oils with strong flavours. 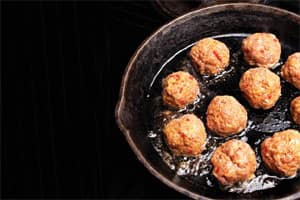 1) Starting at the correct temperature: To fry food right, your oil has to be in the range of 175 degrees Celsius and 225 degrees Celsius (for most oils). If the oil is not hot enough, it will seep into the food instead of merely staying at the surface as it fries, especially with breaded and battered food. The most accurate way is to get a candy thermometer from a kitchen supplies shop that can measure such high temperatures. If that’s not possible, you can eyeball it by watching for a shimmer across the oil surface as it heats up. Make sure you don’t let it smoke. When you suspect it’s getting hot enough, drop a small piece of whatever you’re frying into the oil. It should immediately sizzle and dance merrily on the top. If it sinks and then rises, your oil is not hot enough. If it burns within 10-20 seconds, it’s probably too hot. Eventually you’ll know this by instinct. 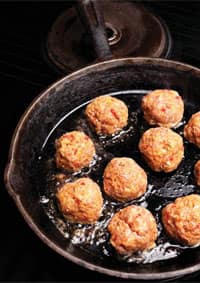 3) Using enough oil: Many people think that using more oil to fry is unhealthier, so they try to fry in as little oil as possible. That’s actually a bad idea. You’ll need to use at least 400-500ml of oil if you want to do a good job of deep-frying. Why is less oil bad, you ask? Well, less oil heats up faster, but it also cools down faster. As you put more food in, the relative temperature drop is more, and I’ve already explained why cooler oil is bad. (Imagine adding one litre of cold water to 10 litres of boiling water. Now imagine adding the same one litre to five litres of boiling water. The five litres will be much cooler than 10 litres, right?) Use an Indian kadhai or a Chinese wok to fry. Theirbowl shape reduces the amount of oil you’ll need.

4) Cutting food into proper size and shape: The ideal shape for fried food is the same as for grilling— flat with as much surface area exposed as possible. Avoid dumping large chunks of food into oil. Large chunks risk having their exteriors cooked way before the interiors are done, so you’ll have either burnt outsides or undercooked insides. Flat, thin slices are ideal whenever possible. If you absolutely must fry something like a chicken leg, turn the heat down after the first 30 seconds and maintain it closer to 175 degrees Celsius while it cooks through all the way.

5) Draining out excess oil after frying: The last step after you’re done is to remove all traces of oil that’s still clinging to the food. The best way is to use a wire spatula to fish out the food and let it rest over your frying pan for about 20-30 seconds while the oil drips down. Then move it to a flat plate lined with paper kitchen towels to absorb the rest. Do not wrap the food in kitchen towel and dab it like I’ve seen some people do. You will cause water vapour to condense and make your food soggy. Now, about that smoke point I mentioned earlier. All oils have a certain temperature above which they break down and start producing smoke. If you see this, you’re killing your oil. This smoke irritates your nose and eyes, and makes you cough too. Restaurants sometimes turn up the heat way high to fry faster, which is why you may get food with an acrid, burnt taste. For deep-frying, refined oils with a high smoke point are ideal. Peanut (groundnut), sunflower, mustard and coconut oils and ghee are all fats that can be heated to 200 degrees Celsius without smoking. Use any of them and you’ll be fine.

If you’ve followed all these guidelines, you should have amazing, tasty fried food that barely has any oil in it. You can reuse your frying oil once or twice before it’s no longer usable. Just allow your oil to cool, strain it through a muslin cloth into a steel or glass jar, and refrigerate it. In a future column, I will write about breaded and battered foods and how to make them tastier when frying. Now go forth and fry without fear!

Madhu Menon is a chef, restaurant consultant and food writer.

Respond to this column at indulge@livemint.com