Alvarez & Marsal is looking to increase its India headcount to 125 from 95 currently, and is also looking to set up an office in Delhi

Mumbai: Turnaround specialist Alvarez & Marsal (A&M) is looking to increase the number of employees in India, the consulting firm’s biggest market outside the US and Europe, said top executives.

“From a headcount perspective this (India) is the fastest growing region outside of the US for us. So it’s extremely important," said Nick Alvarez, managing director and national practice leader of A&M’s private equity performance improvement group and transaction advisory group. “Our largest market is the US followed by the UK and Europe and I would say that India has become the third."

A&M is looking to increase its India headcount to 125 from 95 currently, and is also looking to set up an office in Delhi, said Vikram Uttamsingh, co-head of A&M India. It currently operates from its Mumbai office.

“We are thinking of setting up a risk management vertical for banks. That’s an opportunity that we see here in India. We will look to do that sometime next year," he said.

A&M is also in the process of setting up an office in Delhi.

“We have decided to set up a Delhi office, because we think that is a big market for us on the restructuring side, both with the banks and corporates. We are in the process of hiring a leader for the Delhi office, which will be a managing director level hire," he said.

The consulting firm is targeting a growth of 50% in its top line by next year, he added.

The firm has seen a strong expansion in the last couple of years in terms of service lines as well as headcount.

“In the last two and half years, we have gone from 10 people to 95. We have built out our restructuring practice, we started our private equity (PE) performance improvement practice last year. We have started financial due diligence, commercial due diligence couple of years ago. We have built out corporate finance and forensics," Uttamsingh said, adding that all of these services have been added in the last two and a half years.

Alvarez & Marsal, whose employees ran Lehman Brothers Inc. after the investment bank collapsed in 2008, was hired by Jet Airways (India) Ltd to turn around its business. 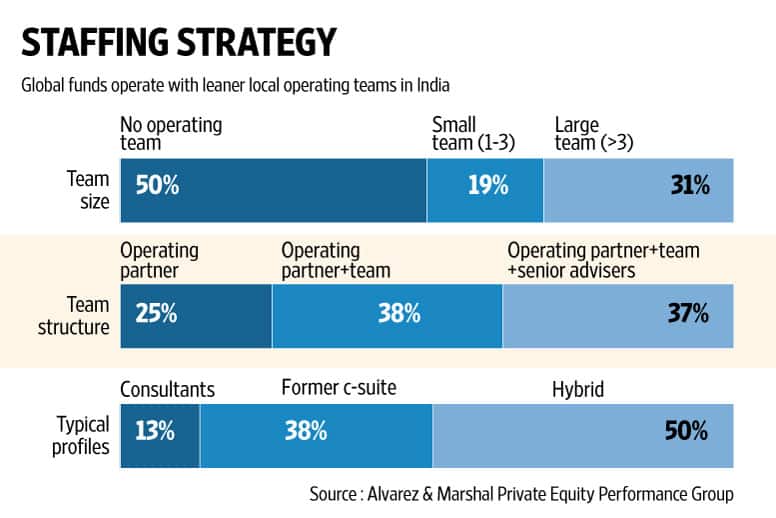 According to Alvarez, the firm’s restructuring business has acted as its beachhead when entering most new markets, including India.

“When we initially start in international offices we would start with more restructuring, turnaround type of work and resources alongside general performance improvement consulting. And then as the market, from our perspective, would develop and our brand would develop, we would then follow with expansion and diversity with different services. We are starting to see that now here in the Indian market," said Alvarez, adding that it usually takes around five years for the brand to get established.

Besides, A&M’s focus on operational expertise differentiates it from the big four audit firms and the top consulting firms, he said.

“The big four are still largely audit-based firms. On the other hand, you have the large bracket strategy firms Bain, McKinsey, BCG, but they are largely strategy. Our heritage is operations. All the senior people that we are looking to bring in are people who have line experience, so that when we are providing advice to our clients, it’s not a conceptual approach. We are also not like an investment bank. We don’t want to be in league tables," said Alvarez.

In India, the firm is seeing strong traction in business from private equity funds, given the increasing trend of buyouts and more funds hiring operating partners, said Alvarez.

Over the last three years, control deals or buyouts have shown a significant increase in India with controlling stake deals increasing to 30% of the overall deal value in H12016 compared to about 8% three years ago, according to a survey of over 20 PE firms active in India, conducted by A&M’s Performance Improvement group.