Home >Companies >Colors back as No. 1 Hindi channel

Colors back as No. 1 Hindi channel

Colors back as No. 1 Hindi channel

New Delhi: The race to hold the top slot in the Hindi entertainment genre, which commands the highest television viewership as well as the largest share of the advertising pie, is far from over. 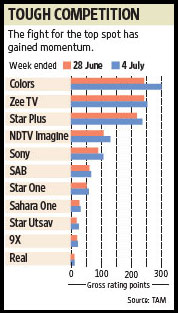 In the week ended 5 July, Colors, the latest entrant in this space, regained its No. 1 position by pipping the previous week’s winner Zee TV, according to data released by TV audience research firm TAM Media Research Pvt. Ltd.

Colors got 300 gross rating points (GRPs), followed by Zee TV at 253 GRPs. GRPs are the total of television rating points (TRPs) over a period of time. TRPs indicate the percentage of viewers watching a programme at a given time.

Star Plus retained its No. 3 slot with 239 GRPs. The channel, from the stable of Star India Pvt. Ltd, ruled the space for nine straight years with a huge margin before Colors broke its monopoly within nine months of its launch.

In the previous week, Zee TV, the channel that topped the space before Star Plus became No. 1 in 2000, had pipped Colors by a slim margin. Zee TV grossed 243.1 GRPs that week, compared with Colors’ 242.8.

“The lead is mainly due to the consistent performance of our TV serials," said Rajesh Kamat, chief executive of Colors. “This is good news because it shows we are not banking on a spike in one show."

“Zee has also grown this week compared with last. We are the only channel that has been growing consistently over the last six months," said Nitin Vaidya, business head of Zee TV. “This time, they (Colors) have done well in certain markets. We are looking at consistent growth and not in spikes in one week. We are happy with a consistent growth."

The fight for the top spot has gained momentum in the past few months. Other Hindi entertainment channels such as SET, Sab TV, NDTV Imagine and 9X lag the top three contenders by a large margin.