Plan to merge NRS and IRS surveys gets a push

Plan to merge NRS and IRS surveys gets a push

Mumbai: Plans to merge the country’s two rival print readership surveys, the bi-annual Indian Readership Survey (IRS) and the annual National Readership Study (NRS), are finally moving ahead, thanks to the economic slowdown.

In recent weeks, the Media Research Users Council (MRUC) that conducts the IRS along with research company Hansa Research Group Pvt. Ltd has held talks with the National Readership Studies Council (NRSC), which produces the NRS, to form a merged readership survey, say two MRUC members who do not want to be identified.

Media buyers buy ads in newspapers and magazines partly on the basis of the findings of readership surveys. 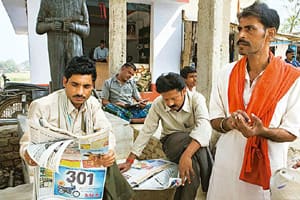 One voice: Media buyers, together with publishers and advertisers, back the concept of a single, simpler and more cost-effective readership survey, although not everyone is pushing for the merger. Madhu Kapparath / Mint

BCCL, publisher of The Times of India and The Economic Times, competes with HT Media Ltd, which publishes the Hindustan Times and Mint.)

At the time, Hansa Research was tipped to get the NRS assignment, since its contract with the MRUC expires this September.

Media buyers, publishers and advertisers back the concept of a single, simpler and more cost-effective readership survey. Hormusji N. Cama, director of Bombay Samachar Pvt. Ltd and president of Indian Newspaper Society (INS) said: “The merged study will be known by a new name and be owned equally by both bodies—MRUC and NRSC."

Cama added that Sam Balsara, chairman of NRSC and the Madison Group, Ashish Bagga, chief executive officer (CEO) of the India Today Group, and G. Krishnan, chairman of MRUC, have met several times in recent weeks to discuss the merger.

“While the details of the merger are being sorted out, IRS would go on as per schedule," Cama said.

One of the MRUC members mentioned in the first instance, and who is CEO of an advertising agency, claimed that Balsara had already sent a written proposal to G. Krishnan on the merger.

Still, even if a merger is on, it will take time. Meanwhile, it is unclear as to which agency will conduct the next edition of the Indian Readership Survey if MRUC doesn’t renew Hansa’s contract.

Ashok Das, managing director, Hansa Research, said he is talking to MRUC about an extension. Sabina Solomon, general manager, MRUC, said the council is considering renewing the contract with Hansa Research for a year, since the latter hasn’t yet signed any new contract with NRSC.

Solomon added that the renewal would be the natural way to proceed until the merger occurs.

Rahul Kansal, chief marketing officer of BCCL, said the company is in favour of a single readership survey. He added that while the group may have had reservations about funding a second study, it would consider paying more for a single study which would be more reliable. Kansal also said he would like to see MRUC improving the validation and checking process for IRS findings that had become suspect in some cases because of inconsistencies between circulation and readership numbers of publications.

“Also, media buyers are mainly concerned with the top 100-150 publications. There’s no point in getting data for 400-odd publications, many of which see local advertiser support," he said.

Advertisers would also prefer one survey, said one of them.

Sandip Tarkas, president, consumer strategy, Pantaloon Retail (India) Ltd, said a merged print study makes more sense. “The (IRS and NRS) research have become suspect because people recognize mastheads and tick it; even if they haven’t read the publication. There needs to be better quality checks on ground," he added.

Not everyone is pushing for a merger. Paresh Nath, publisher, Delhi Press Pvt. Ltd and deputy president of INS, said if people are not able to revive NRS, then it’s best to allow MRUC to continue with IRS. “MRUC already has all components—advertisers, ad agencies, publishers and other media—in its various committees; now it will include a few more people from the other side as well…but that will be the extent of the merger."

Nath had previously said MRUC is a registered company with its governors being equivalent to directors of a company and that a merger with NRSC would lead to structural complications.