COPD, which results in the narrowing of airways, is typically found in smokers and has the fourth largest patient population in the country after cardiac disease, diabetes and infectious diseases. It is expected to become the third largest in 15 years, according to the Pune-based CRF. 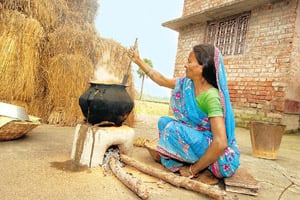 The study is being conducted in collaboration with the Imperial College of London over two years, involving 3,000 patients selected from a population of 100,000 across 22 villages near Pune in Maharashtra. Imperial College will fund at least 90% of the study, which is estimated to cost around £250,000 (Rs1.87crore).

An Imperial College official responsible for projects could not be reached because he is travelling.

According to the ministry of health and family welfare, India has 17 million persons living with COPD, a number that is estimated to rise to 22 million by 2016. Currently, there is no data on the total number of deaths caused by COPD.

While obstructive airways diseases are typically considered an after-effect of rapid urbanization, the pressures of modern living and ignorance, Salvi said, new studies have established that a substantial number of COPD patients were exposed to indoor air pollution due to smoke from biomass fuel such as firewood.

Around 70% of households in India, especially in rural regions, use biomass fuel for cooking. “This has actually led our research to focus on the rural population and the spread of the disease among non-smokers," said Salvi.

He added that according to recent findings, there are 1.1 billion smokers globally, and around three billion people are exposed to biomass fuel.

Of the patients with COPD, around 40% are non-smokers, but Salvi said this number could increase as nearly half the world’s population is exposed to biomass fuel.

Currently, Cipla has the largest portfolio of respiratory medicines in the local market, and is the largest exporter of such drugs. A Cipla executive said the study was independent of the company as CRF is an autonomous research institution and the collaboration with Imperial College would make the findings usable globally. He declined to be named for this article because he is not authorized to talk on this project.

CRF’s studies so far have focused on epidemiological studies on COPD and other respiratory ailments in India’s rural population. It will also study the effects of air pollution on the human respiratory tract and investigate attitudes of patients and doctors towards the diseases, among others.

According to a 2008 International COPD Coalition report, prepared for its annual global conference that year, the disease affects at least 340 million people worldwide and is the fourth largest cause of death after cerebro-vascular, heart and infectious diseases.