BigBasket may invest in DailyNinja, Milkbasket

Bengaluru: India’s largest grocery start-up BigBasket, which raised $300 million from Alibaba Group Holding Ltd earlier this year, is in early talks to make an investment in two smaller grocery delivery start-ups DailyNinja and Milkbasket, according to three people aware of the discussions.

BigBasket may make a minority or majority investment in one of the two start-ups, the people said. The companies haven’t finalized terms of the deals yet.

An informal offer was made to both start-ups earlier this month, the people mentioned above said. All three people requested anonymity as these talks are confidential.

Flush with funds, BigBasket is exploring a number of new initiatives, including the launch of a new subscription service, as it looks to expand aggressively and fend off Amazon India and Flipkart, which are trying to quickly expand their grocery businesses.

Apart from launching a subscription service for customers, BigBasket is also attempting to strengthen its capabilities in the so-called micro-delivery space, which refers to the delivery of a relatively small number of daily essentials such as dairy products, fresh fruits and vegetables, within a few hours of an order being placed.

So far, BigBasket has largely catered to customers who typically order large quantities of groceries, FMCG (fast-moving consumer goods) products and household items on a weekly basis. While that approach has worked well for BigBasket and ensured that the ticket size per order remains high, the online grocery start-up also wants to increase its volume of orders on a daily basis and capture a much bigger share of the grocery delivery business. 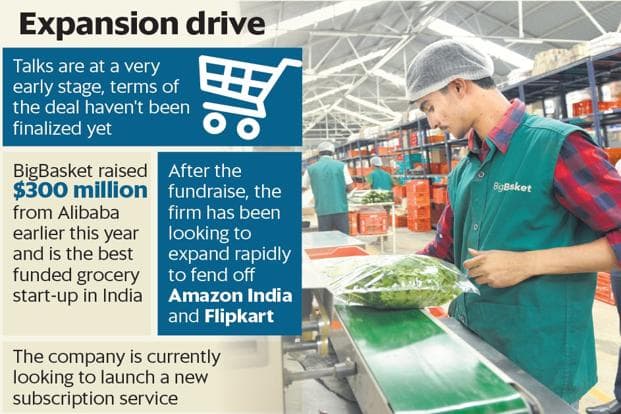 The talks with DailyNinja and Milkbasket were triggered by BigBasket’s desire to simultaneously speed up its capabilities in the micro-delivery space, while also accelerating its plans to launch a subscription service, which a start-up like DailyNinja already offers to consumers, the people mentioned above said.

BigBasket did not respond to emails seeking comment. “We do not comment on any conversations regarding our ongoing fund raise," said Anant Goel, CEO and co-founder of MilkBasket in an email. A spokesperson for DailyNinja denied that it was in talks with BigBasket.

BigBasket, operated by Supermarket Grocery Supplies Pvt. Ltd, is currently the market leader in the online grocery segment and on the back of its recent fund-raising, is going all out to ensure that it keeps its lead. BigBasket had previously raised $150 million from investors such as Sands Capital, International Finance Corp. and Dubai-based private equity investor Abraaj Capital and is easily the most well-funded grocery start-up in the country.

The Bengaluru-based start-up, which was valued at $950 million after its last fund-raise, was founded by CEO Hari Menon, along with V.S. Sudhakar, Vipul Parekh, Abhinay Choudhari and V.S. Ramesh, in December 2011.

DailyNinja has raised roughly $2 million from Sequoia Capital and a bunch of angel investors. Milkbasket has raised about $4 million from Unilever Ventures, Blume Ventures and others.