Hyderabad: The energy unit of GMR Infrastructure Ltd may find it difficult to complete on time the raising of funds for six power projects, as it battles a liquidity crunch and faces stricter due diligence by banks and financial institutions, said a top executive.

GMR Energy Ltd needs as much as Rs29,000 crore of funding for the projects, which are at various stages of development. 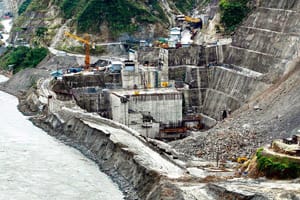 Testing times: A file photo of the Lower Subansiri project in Arunachal Pradesh. Several capital-intensive infrastructure projects have been stalled for lack of funding as economic growth slows to an estimated 7.1%. Indranil Bhoumik / Mint

Creditors are undertaking “stricter and lengthier due diligence process with microscopic analysis on the viability of each of the projects", he added. Due diligence involves a detailed appraisal of project reports and finances before creditors commit themselves to releasing funds.

Several capital-intensive infrastructure projects have been stalled for lack of funding as economic growth slows to an estimated 7.1% in the fiscal year ending 31 March, the slowest pace in six years. Creditors unsure about the viability of projects are reluctant to lend.

Kumar, however, said no banker or financial institution had so far turned down GMR’s requests for funding.

While conceding that there will be some delays in completing the mobilization of funds, he said: “We are confident that the lenders will definitely fund the viable projects, despite some delays."

The company’s current power portfolio of 824MW includes one power project each in the three southern Indian states of Andhra Pradesh, Tamil Nadu and Karnataka.

GMR Energy is developing seven power projects aggregating some 3,560MW in the domestic market and neighbouring Nepal. The company expects to raise funds for one of the projects, located in Orissa, by April, but anticipates delays in financial closure for the other six.

Through the Netherlands-based InterGen, in which it acquired a 50% stake last year for $1 billion (Rs5,170 crore now), the company has 7,658MW of operating capacity and an additional 5,108MW at various stages of development overseas.

An analyst at Mumbai-based equity research firm Prabhudas Lilladher Pvt. Ltd expects “the six power projects to find it difficult to achieve financial closure on account of liquidity crunch and (questions over the) viability" of so-called public-private partnership projects.

“We expect these projects to get deferred by at least one-two years, on account of non-availability of funding. There can also be a case of cancellation or re-bidding of the projects if the terms are not favourable to either of the parties," Rupa Shah, the analyst with Prabhudas Lilladher, said.

GMR Energy’s projects include a coal-based power plant in Chhattisgarh with a capacity of 1,320MW involving an investment of Rs6,500 crore. The company is still waiting for the government to allot assured coal supplies for the project to go ahead with financial closure.

The company has “already initiated talks with banks and financial institutions, and have been updating them on the progress of the project such as land acquisition and tenders for equipment supplies, and the lenders are positive on funding this project as well," said Kumar.

He said the company recently entered an in-principle agreement with the Gujarat government to set up a 2,000MW imported coal-based power project in the state’s coastal region. The project is expected to involve an investment of some Rs10,000 crore.

In Nepal, GMR Energy is developing two hydropower projects, with capacities of 300MW and 250MW, respectively.