MapmyIndia wants to be present in every car

MapmyIndia wants to be present in every car

New Delhi: Rakesh Verma gave up his job at General Motors Corp. in Detroit in 1992 and moved back to India, inspired by a vague desire to do something different. 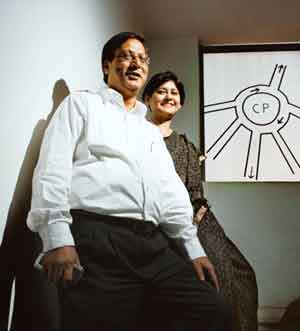 Straightforward: MapmyIndia managing director Rakesh Verma with wife Rashmi. It is the rising acceptability of navigation devices that has resulted in the company growing at around 100% for the last two years. Harikrishna Katragadda / Mint

After getting back home, he and his wife Rashmi made their living with software consulting projects with Tata Steel Ltd (or Tisco as it was known at the time) and IBM Corp.

It was at the 1995 Comdex, the largest software industry trade show in the US, that Verma came across a stall showcasing digital maps. He caught a flight the next day to Albany, the capital of New York state, to strike a deal with Mapinfo, the company that built the software, to create and digitize maps, becoming their India distributor.

Since then, it’s been the story of a dogged entrepreneur stumbling across an idea, creating a niche for himself in the market and pursuing it to its logical conclusion. The Mapinfo deal led to the formation of MapmyIndia, which he set to develop the nascent market for geography-based information systems.

Verma’s first customer was Coca Cola, which had entered India a few years earlier and was looking to expand distribution outside small-towns and into villages.

In order to assign areas for bottlers, Coke needed someone to map out areas in small-towns and villages across the country and MapmyIndia fitted the bill. The company today has 500 enterprise customers including Hindustan Unilever Ltd, Godrej Consumer Products Ltd, Bharat Sanchar Nigam Ltd and Bharti Airtel Ltd, ensuring a steady stream of revenue as it works on improving maps for consumer applications.

CBDCs: RBI must take a leaf out of US Fed’s consultativ ...

In the past two years, digital maps have started gaining acceptability among customers in India and Verma finds himself at the right place at the right time.

As India’s younger generation gets more comfortable using location-based services on cell phones and in cars, MapmyIndia believes this could account for a major chunk of revenue in a few years.

Verma, who comes across as the straightforward, no-nonsense type, has a simple vision.

“Every car and every (mobile) handset in India should have a MapmyIndia map loaded," he says in an interview in his office in New Delhi’s Okhla Industrial Estate.

At 35 million, the US and Europe account for the bulk of navigation devices sold around the world. Russia, China and India are fast catching up. Last year, four million devices were sold in Russia, and Verma believes that the market in India would grow to about 50,000 this fiscal.

It is this rising acceptability that has resulted in MapmyIndia growing at around 100% each year over the last two years and Verma believes the market is at an inflection point from where usage of its products will rise rapidly. The privately held company does not discuss revenue.

With the entry barriers in the business being high, often a map-making company’s main competition is with itself. A poor experience can turn customers off, making them reluctant to try digital maps again.

That’s why the company has between 300 and 400 surveyors on its rolls at any given time. Extensive checks are done every few months and the changes recorded.

A search for driving directions from Gurgaon, a suburb of Delhi, to the national capital, pulled up a list of roads that should be avoided due to construction work. While changes in road names are recorded, the older, more popular titles are also given.

But it’s still not possible to search for house numbers.

“This would be possible in a few years," says Verma.

With the time and effort Verma has invested in updating his maps, he is clear about refusing to accept contracts that involve parting with intellectual property (IP).

“If you lose your IP, you lose everything," he says.

Verma has turned to venture capital funds to raise the money needed to fund the expanding business. Last December, he got $9 million (Rs42.12 crore today) from a consortium led by Qualcomm Inc. While Verma insists that he’s not interested in selling out, he also points out that it’s his responsibility to do take whatever step is right for the business.