Jet also decided on Monday to exit the low-fare segment.

The airline will phase out its JetLite and Jet Konnect (all economy flights) brands by the end of 2014, chairman Naresh Goyal said.

Jet said its net loss in the three months ended 30 June was ₹ 217.6 crore against ₹ 355.4 crore in the year earlier. Still, it was the airline’s sixth straight quarterly loss as it battled high costs and was forced to sell tickets at a discount in the face of intense competition.

Sales rose 17% to ₹ 4,685.6 crore from ₹ 4,005 crore in the year-ago period. Analysts surveyed by Bloomberg had estimated a loss of ₹ 306.90 crore for the quarter on sales of ₹ 4,770.20 crore. The April-to-June quarter is typically a strong one for the airline industry because demand for air travel rises.

Jet Airways said the airline’s overall yield, a measure of profitability, rose by a strong 1.8%, as the restructuring of the airline and the benefits of the partnership with Etihad Airways took hold.

Jet, which has reported annual losses since 2007, announced a three-year restructuring plan in May that included reducing costs and improving efficiency. High fuel costs, low fares and fierce competition have hobbled Indian carriers, who are estimated to lose a combined $1.4 billion in the year ending 31 March, according to estimates by consulting firm Centre for Asia Pacific Aviation. Jet expects its partnership with Etihad to help it return to profitability by 2016-17, according to the plan.

“The economies of scale and cost-saving opportunities offered by the airline’s equity partnership with Etihad Airways through shared resources and facilities, and collaborative procurement has also been responsible for significant savings," the statement said. 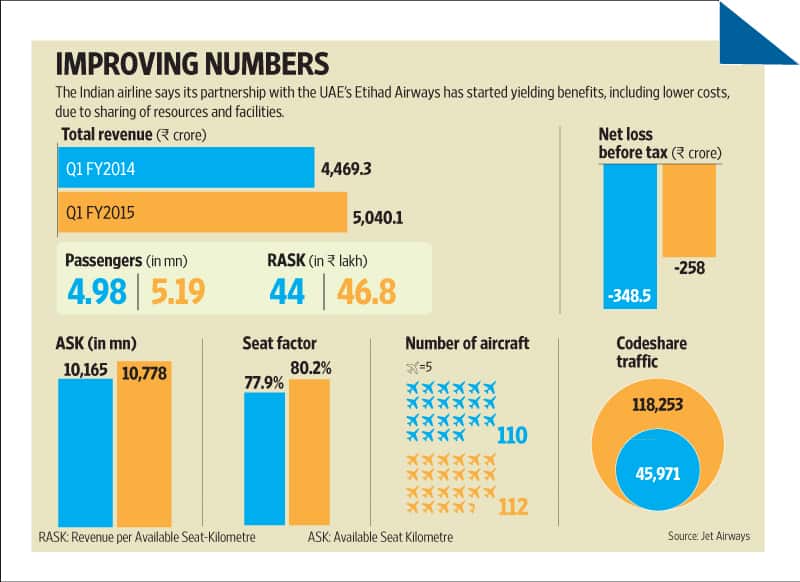 For instance, Jet Airways has renegotiated maintenance contracts which have resulted in savings of about ₹ 270 crore for the current year. All the aircraft of the airline are now effectively deployed, the airline said on Monday.

International operations results improved by 86%, because of a 157% surge in codeshare traffic, which grew to 118,253 passengers in the first quarter, Jet said.

“This is expected to increase further as the full extent of the codeshare expansion with Etihad Airways and Air France, which were activated only halfway through the quarter, take effect and Jet Airways’ planned international network expands and more codeshares come online," it said.

Still, things may only get tougher for Indian airlines, as new entrants, including Tata Sons Ltd and Singapore Airlines Ltd’s ‘Vistara’, are expected to start operations.

Jet’s decision to exit the low-fare segment means it will now compete with Vistara and Air India Ltd instead of IndiGo (run by InterGlobe Aviation Ltd) and SpiceJet Ltd.

All Jet Airways flights will have two-class cabins instead of having a single-class configuration.

Another joint venture by Tata Sons, this one with AirAsia Bhd, launched a low-cost airline, Air Asia India, in India last month.

Experts are sceptical that Jet’s latest move will help boost profit. “Unless Jet Airways pulls a rabbit out of a hat, it will get squeezed between Tata SIA at the top and IndiGo and AirAsia India at the bottom as far as domestic air travel is concerned," said Rishikesha T. Krishnan, professor of strategic management and director, Indian Institute of Management, Indore.

Jet Airways seems to be in a continuous loop of announcing that it will “restructure" and “turn around", but this seems to be easier said than done, even with Etihad onboard, said Bharath Mahadevan, an independent consultant.

“The problem with Jet Airways is that its costs are extremely bloated (given its erstwhile full service legacy). While revenues can only hover around the current levels and go up only by that much every year, costs have to be drastically brought down in order to get anywhere near profitability," Mahadevan said.

Goyal, chairman of Jet Airways, said his airline’s first priority as part of the three-year plan has been to establish a more solid financial foundation for the airline, and in this regard, the company has taken measures to cut borrowing costs.

Goyal said that the strategic alliance with Etihad Airways had been pivotal in putting in place a new business strategy, the benefits of which are now being seen.

“Significant progress has already been made in operational restructuring initiatives with changes to the network and fleet resulting in profitability for the international route network," he said.

Jet Airways said it intends to build on this success and will launch 12 new international flights by the end of the year. These destinations include Abu Dhabi, Dubai, Doha, Singapore, Ho Chi Minh City and Bangkok. Jet also has long-term plans for non-stop operations to Europe and China using the most advanced and efficient wide-body aircraft.

Jet Airways will also dry-lease one of its Boeing 777-300ER to Etihad Airways to operate a new daily service to New Delhi and San Francisco from Abu Dhabi starting on 18 November 2014.