Mumbai: On 10 April, Delhi International Airport Pvt. Ltd, which runs India’s largest airport, announced it would have to down shutters in two months if troubled local airlines did not pay their dues.

This the-end-is-nigh kind of statement fits well with the general refrain of firms in the aviation business in India.

To be sure, the rising oil prices and an unfavourable tax regime have played at least as much havoc with the financials of most airline firms as have ill-advised mergers and rash expansion drives, but the doomsday tenor of their statements also reflects an effort to get the government to play white knight. 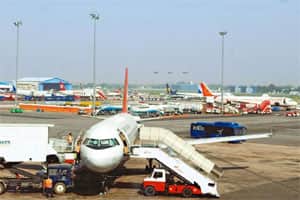 Between the lines: Airlines have figured out a way to get some sops without effecting any changes in their business models, say analysts. Photo by Ramesh Pathania/Mint

The cash-strapped and debt-laden Kingfisher Airlines Ltd has threatened closure if changes aren’t forthcoming in the regulatory regime. The airline owes its staff several months of salaries and a closure will leave around 7,000 jobless.

Another loss-making airline, the state-owned Air India, threatened to declare a lockout in the face of employee unrest—again, largely over unpaid salaries.

There’s usually a demand behind such warnings.

The GMR Group-controlled Delhi airport operator is demanding a 774% increase in airport charges, but regulator Airport Economic Regulatory Authority is unwilling to sanction anything more than 334%. The airport claims to be losing ₹ 2 crore a day.

Kingfisher Airlines has been at the forefront of lobbying the government to allow foreign airlines to invest up to 49% in local carriers. Air India’s efforts—coupled with the government’s seeming reluctance to take hard calls regarding the airline—fetched it a ₹ 30,000 crore bailout package.

Together, the airlines have successfully lobbied the government and can now directly import jet fuel, although none of them has the ability to store or distribute it.

Indeed, the efforts of the airlines are similar to manoeuvres in 2009 when, after a spate of self-generated publicity on how they were losing $2 billion a year due to high fuel and airport charges, they threatened to suspend operations for a day. They eventually withdrew the threat.

“I believe the gripes are legitimate as the sector requires structural reform for airlines to be sustainable and compete effectively, not just domestically but also globally," said Saikat Chaudhuri, assistant professor of management at the Wharton School, University of Pennsylvania, whose work centres?on?mergers, acquisition and innovation management.

“Considering passenger growth in the last one decade, Indian carriers should be minting money. Ironically, they are not. Even though the volume of passengers has gone up, the yields are not very high for domestic as well as foreign carriers," said Chaudhuri. “The cost of operations in India is far higher compared to other countries. India also ignored developing the Delhi airport as a hub."

These apart, the government’s continued financial support to Air India has become a moral hazard.

Craig Jenks, president of Airline/Aircraft Projects Inc., a New York-based air transport consulting and advisory services firm, said there is a tremendous amount of market distortion in India, including high fuel tax, shortage of airports and the provision of an exceptionally large subsidy to Air India. If airlines are adopting scare tactics, he said in response to a question on the same, it is because many of the government’s policies regarding aviation are short-sighted.

Still, the threats, implicit or explicit, are unlikely to be carried out.

“We all know that the shutdown will never happen. Neither Delhi airport will shut down nor will Air India. Kingfisher and Jet are just joining the bandwagon in crying wolf and hoping that something will change," said Bharat Mahadevan, who until recently was regional manager for north-east Asia at Jet Airways.

The real issue, he added, is elsewhere.

“Is this a sustainable solution? In the short term, yes," Mahadevan said. “In the long term, the airlines and the airports need to look at their commercial viability; so it definitely won’t work."

Indeed, the airlines seem to have figured out a way to get some sops without effecting any changes in their business models, said a consultant to airlines.

For instance, added this person, who declined to be identified, “All you will hear from Kingfisher is about how terrible it would be if the airline were to go bust—all those jobs, all that capacity and potential rise in fares." The message is, “If you don’t want a crash-landing of the Indian aviation growth story, allow foreign airlines to invest, make changes in the tax structure..."

Between 2004 and 2008, India’s airline business grew at an average of 15% a year in terms of passengers. Together, Indian airlines ordered nearly 500 new aircraft. And the business also saw two big-ticket acquisitions, of Air Sahara by Jet and Air Deccan by Kingfisher, both in 2006.

To cater to growing demand, the airlines also expanded—indiscriminately, it now emerges. And now, they’d like some help.

India’s aviation minister Ajit Singh seems inclined to offer them that help and said there is no question of “blackmail" being involved.

“We all know that all airlines are in bad shape. In the case of Delhi airport, it is asking for legitimate dues. Airport charges were not increased since 2009," Singh said. “And there is no rule that Delhi airport should give concessions to Air India. Now that Air India is expected to get some money, it will clear the dues."

Singh denied his ministry is giving into airlines’ demands and said it is only trying to address problems in a holistic manner. “In the case of Kingfisher Airlines, the government did not ask banks to lend money to that airline. We can do things within our limit," Singh said. “But one should understand railways and airlines are public utility services."