Thanks for Visiting Mint
You seem to have an Ad Blocker on. Please turn it off in order to continue, or whitelist Mint
HOW TO TURN OFF AD BLOCKER
OR
REFRESH IF YOU ALREADY TURNED OFF THE AD BLOCKER
Home >Companies >India’s domestic aviation market growth in top gear

In the last three years, India has leapfrogged Australia and Japan, and is now steadily bridging the gap with Russia and Brazil

Globally, the domestic segment accounts for 36.4% of the total aviation market in terms of revenue passenger kilometres (RPKs), or the cumulative distance flown by all passengers in a given period.

Although the Indian domestic market has only 1.2% share of the total aviation market, it’s a growth leader among seven major markets that account for 82% of global domestic RPKs. In the last three years, India has leapfrogged Australia and Japan, and is now steadily bridging the gap with Russia and Brazil.

The quality of this growth also stands out. Leading industry trade association IATA, in its July report, refers to domestic aviation as a “three-speed market": India and China in “top gear", mature markets “fumbling for neutral", and Brazil and Russia “stuck in reverse".

India’s growth is riding on new routes, which has a multiplier effect on growth. The IATA report says: “…the outperformances in India are well ahead of the usual elasticities that we would expect to see. This is partly because airlines are adding lots of airport pairs and frequencies, which cut journey times for passengers, and has the same effect on demand as a large cut in fares." 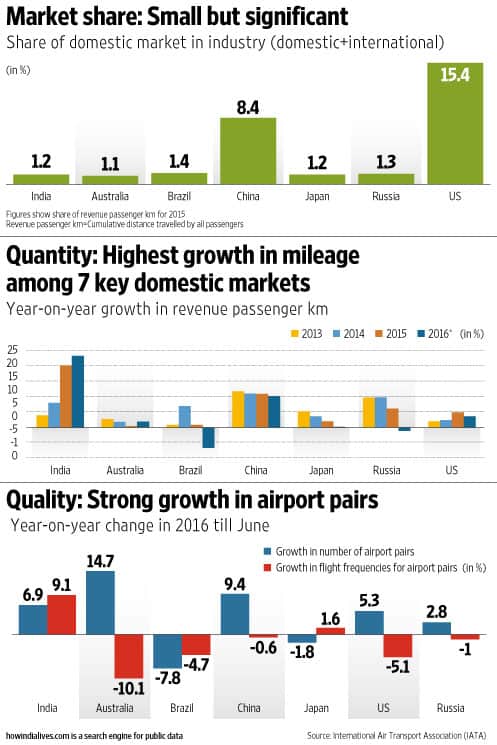