New Delhi: The government on Wednesday moved a step closer to Air India privatisation by inviting expressions of interest in acquiring a controlling stake in the stricken national carrier. The stake sale will go a long way in helping the government realize its disnivestment target for the year besides finding a solution to the vexed issue of having to continue bailing out the loss-making airline. 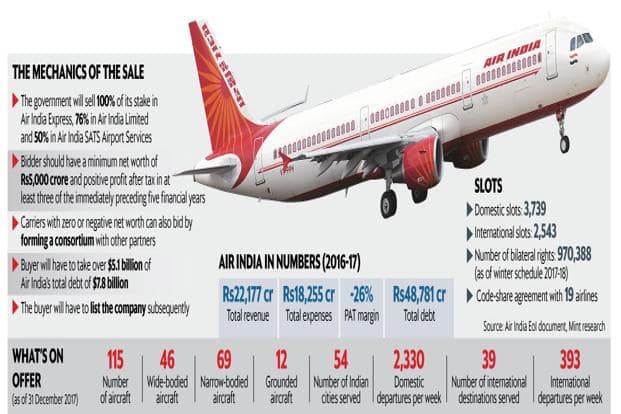 As per the plan, the government will sell 76% stake in the wholly owned national carrier along with 100% stake in low cost international carrier Air India Express Ltd and 50% in Air India SATS Airport Services Pvt. Ltd, a joint venture services company.

The politically sensitive move to privatise the national carrier in the last year in office of the National Democratic Alliance before the 2019 Lok Sabha elections signalled its appetite for economic reform at a time when experts had questioned its resolve to do so.

As per expression of interest document made available by the ministry of civil aviation, potential buyers need to have a net worth of a minimum of Rs5,000 crore and should have reported profit after tax in three of the five previous years. The highest bidder will have to remain invested in the company for three years before any stake sale, except for a compulsory listing of Air India.

The government will also offer a proportionate stake in the eventual listing process aimed at making the company a widely held one to the extent possible. The government’s residual stake sale in Air India in the market will not be a block sale, said the information memorandum.

Air India, which reported a loss of Rs5,765 crore loss in 2016-17 and had total outstanding debt of Rs48,781 crore at the end of 2016-17, has been struggling with intense competition from private Indian carriers, such as like IndiGo (Interglobe Aviation Ltd) and Jet Airways (India) Ltd. Its continuing losses have forced the government to infuse capital even while the NDA has been open to privatizing loss making state-run companies. The Air India sale takes this agenda forward.

Prior to the sale, Air India’s other arms such as Air India Engineering Services, Air India Air Transport Services, Airline Allied Services and Hotel Corporation of India will be transferred to another holding company.

Carried forward business losses of around Rs32,194 crore and unabsorbed depreciation of around Rs31,805 crore in Air India is likely to give benefit of reduced tax liability to the company going forward, said EY, the transaction advisers for the Air India sale.

Air India, which has an operating fleet of 115 aircraft as on 31 December 2017, mainly comprising Airbus and Boeing planes, currently serves around 39 international destinations and has the largest market share on international routes among Indian carriers.