Bangalore: The global food versus fuel debate will be rendered irrelevant by its biofuel business model, claims Reliance Life Sciences or RLS.

“Our model is unique in the sense that it reverses the whole argument of fuel versus food, which the Western world is currently battling with, (as it leads) to fuel with food, with the promotion of food intercrops," says K.V. Subramaniam, CEO and president of RLS, part of the Mukesh Ambani-led Reliance Industries Ltd or RIL group. The company says it is currently testing intercropping of jatropha and pongamia (non-edible fuel crops) along with a diverse set of food crops including corn, mango, medicinal plants and vegetables in its research and development farms at Gandhar in Baruch, Gujarat, and Nagothane in Raigad, Maharashtra. 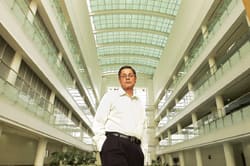 The Reliance group may have scaled down its domestic petroleum retail business but it is ensuring its biofuel reach continues. “The biofuels initiative of Reliance has the larger objectives of contributing to India’s energy security and putting purchasing power in the hands of millions of farmers in India," says Mukesh Ambani, chairman and managing director of RIL in a statement.

On the seeds front, RLS says it is developing hybrid varieties of biofuels that will double the yield under irrigated conditions, which currently hovers around 10 tonnes a hectare. “We are not there yet but will arrive in a year," says Subramaniam. The company believes its existing tissue culture business will help its cause. Besides jatropha and pongamia, RLS is also working on simarouba and jojoba plants.

At the farm level, RLS has alliances with farmers in Andhra Pradesh, Maharashtra, Madhya Pradesh and Gujarat, to build clusters of 100,000 acres feeding into 100,000-tonne biofuel extraction plants. To begin with, it has signed agreements with 1,200 farmers with one- and two-year-old jatropha plantation on 2,200 acres of wasteland in Nizamabad, Andhra Pradesh. The coordinator in the tripartite agreement is GRAM Abhudaya Mandali, a local non-governmental organization.

“Reliance has agreed to buy back seeds at Rs5-6 a kg, which is the prevailing price for seeds for commercial extraction," says N. Samson, director of GRAM. At Kahmmam, says Samson, another NGO called Active (Action for Collective Tribal Improvement and Vocational Education) is signing up 5,000 acres in cultivation for RLS, which has set up a pilot plant for biodiesel in Kakinada.

Elsewhere, others are following similar ambitions. Bharat Petroleum Corp. Ltd, in equal equity partnership with biotechnology company Nandan Biomatrix Ltd, and construction company Shapoorji Pallonji Co. Ltd, set up Bharat Renewable Energy Ltd, or Brel, in June. Brel aims to bring 1 million acres under jatropha acreage in Uttar Pradesh, creating one million jobs and producing 1 million tonnes of biodiesel. “The biggest challenge in this business is of scalability; even a 2.5% blend (with fuel used in the country) will require huge cultivation," says C.S. Jadhav, director, marketing at Nandan in Hyderabad. Brel is working with the Uttar Pradesh panchayats, which are often the custodians of wastelands, to identify farmers for Jatropha cultivation.

Since Brel involves the state government, its CEO, A.K. Bansal believes this model is more sustainable than others as the government will fund it under the National Rural Employment Guarantee Scheme. As even good plantations take two-three years to yield seeds, the rubber will meet the road when some of these programmes gain commercial scale and when the biofuel policy, due to be announced by September, is in place.

Today, there’s no clarity on either of the two key drivers—price and market. “There is no indicative market in India, be it flexi or fixed. Whether it is 0.5% or 5%, let the blend be mandated by the government," says Suprotim Ganguly, deputy director, biofuels and energy efficiency, Confederation of Indian Industry.

CII is lobbying the government for a price higher than the existing ₹ 26.50/litre of biodiesel.