Ola drives into UK, Oyo makes more room for itself in China

UK, Oyo believe they can attract customers abroad while competing with international rivals

Bengaluru: Ola, India’s largest cab-hailing service, is taking its fight with Uber to overseas markets, while hotel aggregator Oyo is expanding rapidly in China, one of the world’s biggest hotel markets, underscoring rising confidence levels of Indian internet start-ups in their ambition to have a global footprint.

Less than a year after launching in Australia, Ola said it is now entering the UK. Oyo, meanwhile, said it is has expanded to 1,000 hotels across 28 provinces in China.

The key reason is the belief among the founders of these start-ups that their platforms can attract customers overseas while competing with bigger, international rivals. This has also allowed them to compete strongly with larger overseas rivals in India as well.

For instance, Ola has so far come out on top of Uber in a gruelling domestic battle for market share. Oyo has seen its business turn around thanks to efforts to gain full control of the room inventory on its platforms. 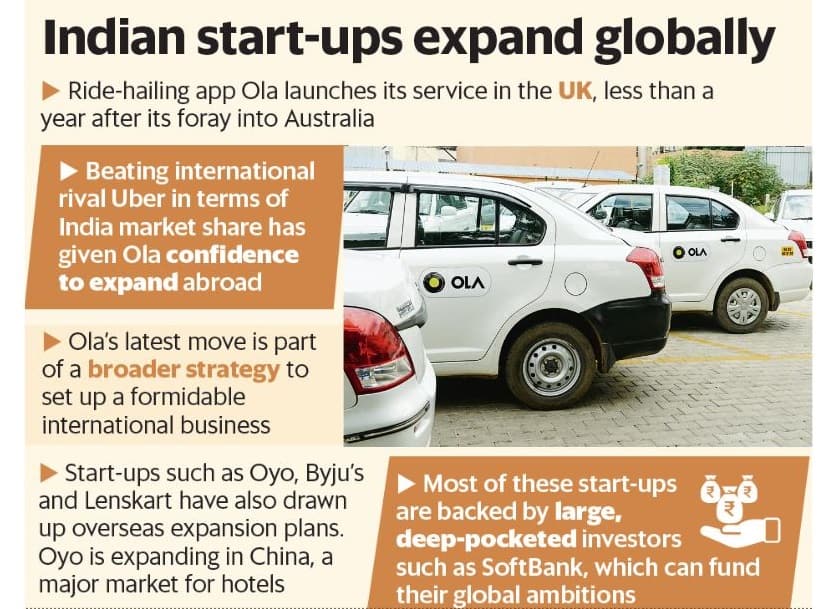 Ola’s co-founder, Bhavish Aggarwal, known as a hard-charging entrepreneur, has been aggressively pushing executives at his start-up to build out its international business rapidly, as he doubles down on what it is being seen as a potentially risky, expensive bet. Similarly, other founders at start-ups such as Lenskart, Oyo and Byju’s have also backed the abilities of their respective platforms to come out on top in international markets.

What has also helped matters is that each of these start-ups is backed by large, deep-pocketed investors such as Japan’s SoftBank. Over the past year, these investors have written large cheques to start-ups that have emerged as market leaders, thus effectively helping bankroll their international moves.

Ola on Tuesday said it plans to enter the UK as it obtained licences to operate in South Wales and Greater Manchester. The company would launch operations in South Wales within the next month.

“The UK is a fantastic place to do business and we look forward to providing a responsible, compelling, new service that can help the country meet its demanding mobility needs," said Aggarwal, also the chief executive of Ola. “We look forward to our continued engagement with policymakers and regulators as we expand across the country and build a company embedded in the UK."

Ola’s latest move is part of a broader strategy to have a large international business that will generate consistent revenue, alongside its Indian operations.

In May, Ola, run by ANI Technologies Pvt. Ltd, expanded its presence in Australia by starting services in Brisbane, the Gold Coast and Canberra.

Mint first reported on 28 May that Ola is adopting a holding company structure similar to that of India’s most successful internet start-up, Flipkart, to boost valuation and improve management of its businesses. As part of that strategy, Ola has also created a separate unit for its international business.