RIL banks on global talent for next phase of growth

RIL banks on global talent for next phase of growth

Mumbai: After building businesses such as textiles, petrochemicals, crude refining, oil and gas exploration and retail from scratch with the help of overseas consultants and Indian professionals for over half a century, Reliance Industries Ltd (RIL) has started turning to foreign managers to run even day-to-operations that are becoming more complex as it seeks to usher in the next phase of growth at the conglomerate.

RIL, set up in 1958 by Dhirubhai Ambani, the son of a school teacher from Chorwad village in Gujarat, still has its old local hands serving as executive board members overseeing specific businesses, but the responsibility of managing some key units has shifted to expatriates recruited from the UK, the US, Thailand, Australia, Germany, Canada, Italy, Israel, South Africa, New Zealand and the Netherlands, among others.

RIL, which clocked ₹ 2.58 trillion in revenue in fiscal 2011, has relied in the past on the technical and management expertise of foreign consulting firms to help it set up complex businesses that required huge investment. The strategy, going forward, is to build such capacity in-house through employees and equity partners. 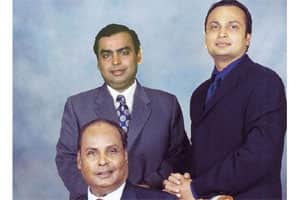 “As RIL has grown over the years and today operates in vast geographies, there is a need to bring in leadership that has experience in working in such gruelling and varied environments. The shift in strategy is that these recruits are for specific line functions and not for projects. This will also help in creating a second line of managers who will be trained under the experienced leaders."

At least 50 expats are working for RIL now, either directly on the company’s payroll, or on deputation from technology partners and suppliers, although foreign managers being seconded to the company for temporary assignments is not a new practice. Five of them are functioning as chief executives or chief operating officers of key businesses.

While rolling out telecommunications services in 2002, RIL relied heavily on external assistance from management consulting firm McKinsey and Co., which had set up six separate teams in India and abroad for the purpose.

Schlumberger Ltd, the world’s largest oilfield services firm, has worked with RIL since 2001 to help it develop the D6 gas reservoir in the Krishna Godavari basin, off the eastern coast of India. The reservoir went on to become India’s largest gas find till date, though output from the field has been declining since 2010, and has been an area of concern for the company. RIL’s attempt to seek solutions to operational challenges like those at D6 from the best in the business is evident from its deal with BP Plc., which was finalized in August 2011.

The UK energy conglomerate picked up a 30% stake in 21 oil and gas blocks operated by RIL for $7.2 billion. More than the financial consideration, it was BP’s proven expertise in deepwater drilling that triggered the deal as it has been made clear that the overseas company will spearhead the oil and gas exploration and production business henceforth.

Though RIL has traditionally built and run businesses mostly by itself, it has been willing to let international experts take control of new ventures.

The shale gas assets RIL has bought into in the US is an example where it is a passive, financial investor, learning the new technology while the partner drives the business. 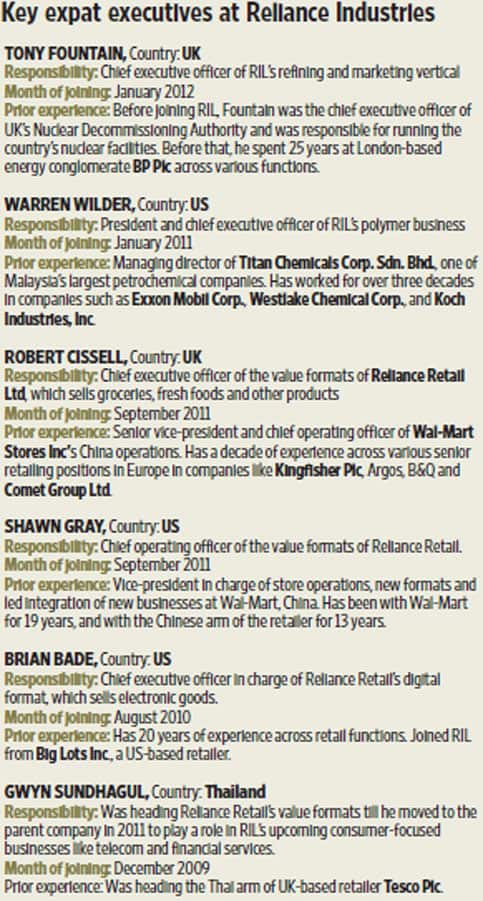 In February 2012, RIL formally announced a joint venture with Russian petrochemical maker Sibur to build a butyl rubber facility at its Jamnagar facility in Gujarat. Though RIL will hold majority control of the new venture, executives of its Russian partner, which has the necessary technology, will be in Gujarat on deputation to run day-to-day operations.

As other large Indian businesses houses have similarly expanded operations globally, the role of expats has grown in significance.

The Tata group also has a number of foreign professionals working for it. Two key overseas acquisitions—European steel maker Corus Group Plc. and British car maker JaguarLand Rover—brought on board a number of such executives.

Corus, which is now called Tata Steel Europe Ltd, has a number of foreign executives running the show, led by Karl-Ulrich Kohler, who is CEO and managing director.

A key expat executive who helped the Tata group get a substantial international footprint was Alan Rosling, who has served as an executive director of Tata Sons Ltd since 2004 and spearheaded many of its global acquisitions. He quit in 2009.

The Essar Group is another entity that has roped in an expat chief executive to head one of its businesses with Alwyn Keith Bowden functioning as president and CEO of Essar Projects Ltd, its infrastructure development arm. However, RIL is perhaps the only group now that has expats in leadership roles across most of its core businesses.

The head of a large human resource consulting firm agreed that with the kind of scale and size that RIL had achieved, it wasn’t feasible to depend on external consultants for technical expertise all the time. He declined to be identified as he is not authorized to comment on a specific company. “To be seen as a cutting edge Indian company globally, it is important to invest in thought leadership and innovation," this HR consultant said. “This can only come by investing in the best available human capital globally."

Vivek Paranjpe, RIL’s chief human resource officer, said in an email that hiring global talent was a part of its endeavour to recruit the best available talent in leadership and “highly technical arenas".

“We certainly need to have a balanced mix of local and global talent of high quality," Paranjpe said. “We continue to be a destination for some of the best talent in the industries that we operate due to our size, scale, work practices and the inclusive environment."

The strategy was to hire the “best in class irrespective of geographic/nationality considerations," the RIL spokesman added. A senior RIL official, speaking on condition of anonymity, said these foreign professionals brought in certain “standard operating procedures", which they had successfully implemented in the international corporations they had worked for earlier, and the move had yielded positive results thus far.

In certain businesses like petrochemicals, where there aren’t too many competitors of the same scale and size as RIL in India, it was essential to look for talent abroad, he added.

Ajay Soni, practice leader for leadership consulting for the Asia-Pacific region at international consulting firm Aon Hewitt, said that according to a study by his firm in November 2011, top Indian companies were increasingly focusing on “enhancing diversity in leadership, in terms of mindset, culture, nationality and gender."

Hiring multi-cultural and multi-national professionals as senior leaders was a reflection of the kind of global stature that an Indian company was looking to achieve, Soni said.