Hoteliers to add 58,000 rooms as travel and tourism revive

Hoteliers to add 58,000 rooms as travel and tourism revive

Mumbai: Hoteliers in India would add around 58,000 rooms in the next five years, led by global companies such as Hyatt Corp., Marriott International Inc. and InterContinental Hotels Group, as travel and tourism revives after an economic slowdown. 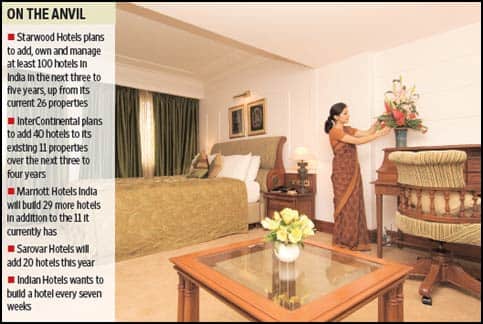 Many delegates at the Hotel Investment Conference South Asia 2010 on Wednesday said India’s growth rates are second only to China.

Jolyon Bulley, vice-president, operations, South East and South West Asia at InterContinental, said the company would add 40 hotels to its existing 11 properties in the next three to four years.

Indian firms are not far behind, with Sarovar Hotels Pvt. Ltd, a franchiser for Park Plaza and the Park Inn hotel brands in India, leading the way. “We will be building 20 hotels this year. Six will be in Delhi due to Commonwealth Games," said Anil Madhok, managing director at Sarovar Hotels. “We may not be adding 20 hotels every year, but eight to 10."