Home >Companies >&#8216;From the beginning, I thought exponentially, not incrementally&#8217;

‘From the beginning, I thought exponentially, not incrementally’

Mumbai:The initial public offering (IPO) of Koutons Retail India Ltd, which opened on 18 September and closed on Friday, was oversubscribed by 45.21 times. The apparel maker and retailer, received 159 million share applications against the issue size of 3,524,439 shares. The company plans to expand its footprint and product offerings using the Rs146 crore it hopes to raise from the issue. Midway through the IPO, the retail chain’s chairman D.P.S. Kohli talked to Mint about the company’s plans. Edited excerpts:

What was your vision for the company when you started the business from a modest office in 1991? Did you think all of this would happen back then?

Me and my brother-in-law started this business with Rs1 lakh, from a two-room office in New Delhi. At the time, denim was very big. We picked the name Charlie 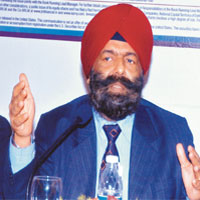 You started off as an apparel manufacturer and exporter. What made you stop that and bet so big on retail? Did you see retail taking off the way it did?

We manufactured apparel and sold it through distributors and did some export and had just 27 exclusive brand outlets (EBOs). In 2004, we could see that people’s aspirations and awareness were growing. At our EBOs, we could see how customers responded to the whole range of clothes, our stores and to promotions. We decided to close our others businesses and get into EBOs. Reducing intermediaries allowed us to pass on the 15-18% cost benefit to our consumers. It was an aggressive decision but we grew from 27 stores in 2004 to 74 in 2005, to 206 in 2006, and 999 now.

You probably have more stores than any other retailer. Did you have any domestic or international models?

We travelled globally and studied Giordano International Ltd, Bossini Enterprises Ltd, Zara and Hennes & Mauritz AB (H&M). They seemed so big then but I realized then that the Indian market could be 100 times that of Hong Kong. We wanted to do it here.

Analysts have expressed concerns that it will be hard for you to grow and add stores at the pace you are currently.

From the beginning, I thought exponentially not incrementally. When others talked about adding five stores a year, I thought of adding 200 stores a year. We set up infrastructure to control our countrywide stores when we first started growing. So we have invested in information technology and now we have leased land in Gurgaon to integrate our manufacturing facilities.

The hard part was growing from 74 to 200 because we had to be mindful of cost and yet plan for scale. Now we have created the base for further growth and I don’t think it will be a problem.

Analysts have also been concerned about the large inventory pile-ups. Are you working to fix that?

We have a differentiated and integrated model, which leads to a lot of efficiencies that not everyone seems to have understood. We have shown a profit after tax of 8% because of the economies of scale we have achieved. We have our own sourcing team that looks for fashion trends and sources from across the globe, leading to a cost reduction of 30-40%. At the stores, I change stocks 2.8 times a year to keep fashions latest.

Also, we are opening a lot of stores all the time so we have to keep inventories ready for an impending store opening. For instance, we had 676 stores in March and 999 now.