Home >companies >Weaker rupee may prop up IT earnings

Weaker rupee may prop up IT earnings

Weaker rupee may prop up IT earnings

Mumbai: The uncertain macroeconomic environment in the US and Europe and the weakening of the Indian rupee against the dollar are expected to be the dominant themes for the seasonally strong second quarter earnings of information technology (IT) companies. Infosys Ltd is set to kick off quarterly earnings for the sector on Wednesday.

Most analysts are expecting top-tier firms to increase revenue by 5-6% quarter-on-quarter in dollar terms, while revenue in rupee terms could be slightly higher because of the strong surge of the US currency against the rupee in the quarter. The dollar appreciated 8.8% against the rupee during the July-September period.

Wipro Ltd is likely to be the sole exception, with revenue expected to grow 1-3% as it’s yet to return to its earlier growth trajectory after a recast in top management after several successive quarters when growth trailed its peers. 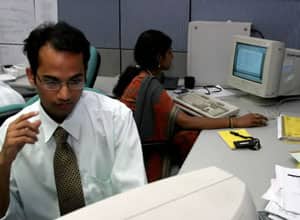 Industry observers said revenue forecast from Infosys will continue to be the most watched data point. “The guidance from Infosys will be important. We expect volume growth guidance (implied from dollar revenue guidance) to be maintained," said Dipen Shah, senior vice-president and head of private client group research at brokerage Kotak Securities Ltd.

Pankaj Kapoor and Apoorva Oza of Standard Chartered Equity Research wrote in a 22 September note to clients that they expect a cut-back in Infosys’ FY12 US revenue guidance though rupee weakness could prop up earnings per share guidance. “Internal restructuring has picked up among financial services firms with 75,000+ employee cuts announced since the second quarter of 2011. We expect it to affect near-term volume trajectory for offshore players. Infosys could see the impact ahead of peers given the disproportionate share of its key clients among such names," they wrote.

In sharp contrast, Accenture reported market-beating earnings and forecast a strong 2012 almost a fortnight back, temporarily allaying fears of an industry-wide slowdown.

The same quarter last year was a record one for Infosys, India’s second-largest IT company by revenue, posting, for the first time, organic growth of more than $100 million during a quarter, growing almost 12.1% sequentially.

Apart from Infosys’ forecast, the market will keep a close watch on declines in the pricing of deals and accompanying management commentary, further insights into the sustainability of discretionary spends, hiring trends and comments on new opportunities like cloud computing.

“The uncertain macro environment may lead to continued conservatism from the management, despite no indications of any impact at the micro (customer) level as yet," Shah said.

The US and Europe, despite a slowdown in growth, are still the world’s largest IT markets. Over 70% of the revenue of the $76 billion Indian IT industry still comes from these markets.

“The outlook for the global market for business and government purchases of technology goods and services will see slowing, though still positive growth, in 2012," Forrester Research’s Andrew Bartels said in mid-September. “Growth in 2011 will be better, because vendors have had two quarters of generally strong demand before economic weakness surfaced in July and August, and that weakness won’t lead to slower technology market growth until the fourth quarter of 2011." The IT industry researcher estimates that on a global basis, IT purchases will be $2.04 billion in 2011.

In the July-September period, most brokerages downgraded Indian IT stocks following the deteriorating macroeconomic situation in the Western markets. Analysts feared decision making on IT budgets could be hit because of the slowdown.

According to UK-based Ovum, an independent research and analysis firm that looks at technology, telecom and sourcing decision makers, the global IT services market was hit hard in the second quarter (April-June) of 2011, with the value of new contracts falling to the lowest in more than eight years.

The Bombay Stock Exchange’s IT Index slumped 13.5% in the September quarter, compared with a 12.7% fall in the Sensex. However, IT stocks have recently outperformed as the US dollar has gained 9.77% against the rupee since 1 August.

Ashwin Ramarathinam in Mumbai and Sridhar K. Chari in Bangalore contributed to this story.