The Olympics in 2012 may be the largest, most watched, most diverse sporting event in the world. Over a period of two weeks, London, and a scattering of sites all over the UK, will host the world’s best proponents in 302 disciplines across 26 sports. Events range from the universally popular football to more obscure competitions such as Keirin track cycling. 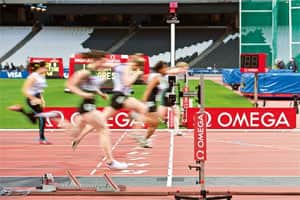 And no Olympic event is watched more keenly, or timed more carefully, than the men’s 100m sprint. With stars such as Usain Bolt in the running, world records are expected to tumble in the Olympic Stadium in London during the final on 5 August. But what really takes place behind the scenes in those 10 frantic seconds?

Indulge asked Omega, the official timekeepers for the 2012 Olympics, to give us a glimpse of the sophisticated web of technology that kicks into action before, during and just after the 100m sprint finals

Secondly, an IAAF official in the control room checks the main timing device, the digital line-scan camera photos, for any potential issues—photo finishes or minor timing corrections. This takes a few seconds. He then certifies the result. The officially confirmed timing is beamed into the stadium and, through a suite of softwares, to television channels.