London: Vodafone Group, the world’s largest mobile operator by revenue, is considering a bid for Britain’s Cable & Wireless Worldwide, whose fixed-line network could boost bandwidth for its Internet-hungry customers. 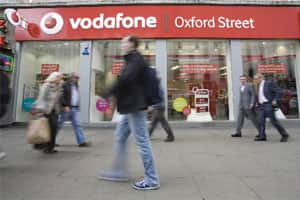 C&W Worldwide, which has issued a string of profit warnings since its demerger from Cable & Wireless Communications in March 2010, has fixed lines that are used by mobile operators to provide links to mobile transmitters and switching offices -- a process known as wholesale backhaul.

It also provides voice, data and hosting services to companies like Next, Tesco and United Utilities, and retains an international cable network connecting more than 150 countries.

It declined to comment on Vodafone’s statement, which came after the Sunday Times reported it was considering a £700 million ($1.1 billion) bid for the group.

C&W Worldwide’s shares, which have lost three-quarters of their value in the last 18 months, surged 30% to a three-month high of 25.5 pence on Monday, valuing the company at £700 million, while Vodafone rose 0.9% to 174p.

Tim Daniels, analyst at Olivetree Securities, said a deal could make sense for Vodafone because it had no fixed-line network in Britain in contrast to many other markets where it had integrated fixed and wireless networks.

“Pressure on data networks from smartphones and tablets means that mobile companies can’t cope with all the traffic and have to move some of the overspill onto fixed-line networks," he said.

Vodafone could also get some corporate customers “on the cheap" by doing a deal, he added.

Broker Bernstein agreed that buying C&W Worldwide’s fibre network would improve Vodafone’s UK network quality and would limit the charges it had to pay to rent fixed-line capacity.

But it said that with cable operator Virgin Media starting to provide wholesale backhaul in competition with C&W Worldwide and BT, the opportunity to get more competitive rates was decreasing not increasing.

Telefonica, the owner of Britain’s O2 network, could also be interested, analyst Robin Bienenstock said, but he noted the Spanish group was more focused on asset sales.

And France Telecom and Deutsche Telekom, the owners of the other large mobile network, Everything Everywhere, were more likely to float the joint venture than do more deals, he said.

“In our view private equity would also be the rational buyers of this asset," he said. The Sunday Times said Apax was running a rule over the business.

A banker who advises European telecom companies said that unlike private equity firms, Vodafone would be able to generate synergies by moving some of its excess traffic onto C&W’s network, which would give it scope for a higher bid.

“I find it hard to imagine that private equity would be able to outbid Vodafone if it wants this asset," the banker said.

Analyst Guy Peddy at MacQuarie said the operational issues that needed fixing in Cable & Wireless Worldwide made a bid a possibility rather than a probability.

“The due diligence that Vodafone would have to do would have to make them comfortable there is an underlying sustainable business," he said. “It’s not necessarily an easy sell to its investors."

C&W Worldwide has stumbled from one crisis to another since it split from the Caribbean-focused international half of the former Cable & Wireless.

It announced writedowns of £624 million in November, and John Pluthero, who notably received bonuses of more than £10 million from his time at Cable & Wireless, left after less than six months in the job.

Ex-Vodafone executive Gavin Darby was brought on board to lead a turnaround.

Peddy said he had a 40 pence price target on Cable & Wireless Worldwide, giving a market cap of £1.1 billion, and he said investors should not sell out below that level.

Reuters reported last year that Cable & Wireless Worldwide could make a tempting target for mobile phone operators such as Vodafone or O2.

Vodafone, which is flush with the proceeds of asset sales in France, Poland, Japan and China, said any bid would be in cash.