London: India-focused mining group Vedanta Resources Plc said no provisions were needed for a fraud probe into its iron ore unit as it posted a steep fall in first-half profit due to weaker metals prices. 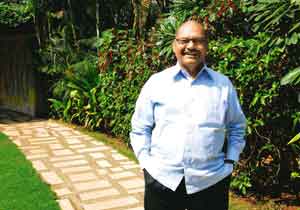 Weaker prices: Vedanta chairman Anil Agarwal. The firm’s revenue declined 25% to $2.98 billion in the first half of the current fiscal. Abhijit Bhatlekar / Mint

Unit Sesa Goa Ltd, India’s biggest iron ore exporter, had said on 29 October that it was under investigation by the country’s Serious Fraud Investigation Office for financial and other irregularities, sparking a slide in its shares.

But Vedanta chief executive M.S. Mehta said on Thursday the probe related to issues in 2003, four years before Vedanta bought its 51% stake in Sesa.

“It has nothing to do with Vedanta and our understanding is that it’s a very old matter and not of great significance," he told a conference call. “So we don’t need to provide any provisions in the books or accounts because it doesn’t relate to those kind of cases."

London-listed Vedanta said basic earnings per share for the six months to end September fell 44% to 68.5 cents (Rs32.50), beating a consensus forecast of 57 cents from eight analysts polled by the firm.

The better-than-expected performance was driven by a lower tax rate and foreign exchange gains, Morgan Stanley said in a note.

Some analysts, however, faulted the cost performance at the firm’s Konkola Copper Mines (KCM) in Zambia of $1.69 per pound (0.45kg), above the year-end target of $1.35.

The group—which has operations in India, Australia and Zambia—said its strong balance sheet allowed it to continue investing in new mines and expanding operations as other companies cut back during the economic downturn.

“The balance sheet looks if anything overcapitalized, which suggests plenty of capacity to continue growing aggressively," Cazenoze said.

Vedanta said it had net debt of $969 million with cash and liquid investments of $6 billion.

“Expansionary capital expenditure in the period was $1.79 billion, in what we anticipate will be the peak year for the current organic growth programme," chairman Anil Agarwal said.

Vedanta was upbeat about how the world was rebounding from the global recession.

“We appear to be witnessing the early signs of economic recovery globally," Agarwal said. “We expect that the economic and industrial growth in India will help underpin the demand for our products."

The group proposed an interim dividend of 17.5 cents, up from 16.5 cents last year, and said it remained committed to its progressive dividend policy.

Earnings before interest, taxes, depreciation and amortization fell 41% to $746 million, while revenue declined 25% to $2.98 billion.

The price of metals were hit hard last year amid the global financial crisis, but have recovered some of that lost ground this year.

The price of zinc—Vedanta’s most profitable metal accounting for half of core earnings—has bounced 85% this year, but it is still 23% below its peak last year.

Earlier this month, Vedanta forecast higher production in the second half after it posted strong output gains for most metals in its fiscal Q2.