Mumbai: On the outskirts of Pune, in a hall that until recently used to be hired out as a wedding venue, a team of 40 scientists is working on technological innovations that could turn Tata Chemicals Ltd into a maker of clean speciality chemicals from a commodities manufacturer of soda ash, edible salt and fertilizer. 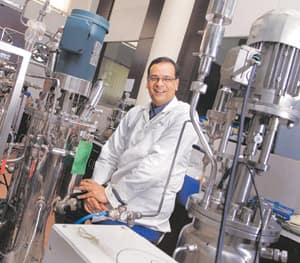 The futuristic way: Murali Sastry is ranked among the world’s top 15 experts in nanotechnology. Abhijit Bhatlekar/Mint

“If you look at the global players—Dow Chemicals, BASF and Dupont—and see their evolutionary curve, they’ve also done pretty much the same thing," says Murali Sastry, the chief scientist at Tata Chemicals.

The effort is partly aimed at insulating Tata Chemicals from the effect of spikes in commodity prices. In a 19 June research report by Bank of America Merrill Lynch, analyst Prasad Deshmukh cut fiscal 2010 and fiscal 2011 earnings estimates for the company by 16% and 21%, respectively.

“We expect weakness in soda ash to more than offset gains made in (the) fertilizer business," Deshmukh wrote.

Sastry is ranked among the world’s top 15 experts in nanotechnology, a futuristic manufacturing technology that some scientists say will make most products lighter, stronger, cleaner, less expensive and more precise. It involves the manipulation or use of materials and devices so minute that nothing can be built any smaller.

That’s a technology that’s being used in experiments at the Pune lab. “Along the way we figured taking up nanotechnology," Sastry says. “It is not an esoteric branch of science. It has evolved very rapidly in the last 10 years. It is an enabling technology."

“It is all about figuring how it can help the company," he adds. “It is a learning process. It is a work in progress."

Tata Chemicals plans to add more products in the food additives business; research work is under way on neutraceuticals, which refers to food extracts claimed to have medicinal effects on human health. Other projects, such as spraying nano materials on steel to stop the bleaching of paint, are in progress.

Sastry himself prefers to call his outfit more a research and development laboratory than an innovation centre. He is guarded in talking about specific projects.

“This business is too risky," he says.

In India, only a few companies have set up such research labs with a focus on nanotechnology. They include Reliance Industries Ltd, which has two centres for polymer research and life sciences, Mahindra and Mahindra Ltd in automobiles and the Tata group.

“If you look at India today, (in) early-stage nano technology start-ups, investments still don’t happen. Venture capital funds are still wary," Sastry says. The scientist ducks a question on the progress of a project aimed at building a low-cost, anti-microbial water system that runs without electricity.

Tata group chairman Ratan Tata has hinted that his next dream project was to do with drinking water. Sastry screws up his eyebrows when asked whether his team will be the chosen one to deliver the project on water which, if successful, will enable millions of Indians to have access to safe drinking water.

“I don’t know what you are talking about," he says with a hint of a smile. “It’s a dream for all of us. It’s a national issue," he demurs.

What Tata spoke about was probably in a “holistic sense" including water management, replenishing field water and providing industry with recycled water, Sastry explains. Inputs would come from all the Tata group companies and the Pune laboratory, too, hopes to contribute.

“He (Ratan Tata) is asking everyone to look at water. Let’s wait and see," Sastry added.

At a recent conference on innovations at Tata group some months ago, R. Gopalakrishnan, a member of the board of holding company Tata Sons Ltd, spoke briefly about how Tata Chemicals had innovated by building a portable plant to filter and desalinate water for tsunami-hit villages in Tamil Nadu. The group recently set up an innovation cluster for water that will enable group companies to contribute to the project.

Before turning to scientific research, Sastry was a budding cricketer who represented Tamil Nadu in the under-19 and under-22 teams alongside flashy Test opener Krishnamachari Srikkanth. His cricketing career was cut short by a knee problem.

“Otherwise, I could have got into the Ranji team," the scientist says. In the early 1990s, Sastry was doing well for himself in academia in Italy and France, but returned to India when R.A. Mashelkar, the then director general of the Council of Scientific and Industrial Research (CSIR) beckoned scientists like him to head CSIR projects.

Sastry set up the nanotechnology unit at the National Chemicals Laboratory (NCL) for CSIR. He joined the Tatas in 2005 because the “Tata" name attracted him.

At NCL, “we were doing a lot of work but nothing was materializing as a product", he says. “In an academic world there is only so much you can do, you cannot do a product."

Since 2005, Sastry’s team has filed for 30 international patents, and the success rate in this industry is one in 200, says Sastry, a physicist by training.

The research lab is trying to serve not only Tata Chemicals, but the group as a whole.

Tata Chemicals has spent about Rs50 crore so far on the lab, but it pales in comparison with its global peers. However, Sastry doesn’t let that deter him. “Is there a correlation on R&D (research and development) spends and of the products that come out of the labs?" he asks.

If some of the products that come out of the lab are successful, he’s certain that it will help the company become a speciality chemicals player, though he is aware that commercial success can often be elusive in R&D.

“The company is keen to become green," he says. “We are hoping for some disruptive innovations and not an incremental innovation."