Mumbai: IndiGo’s troubles with its new Airbus A320neo aircraft continued, with India’s biggest airline grounding an undisclosed number of planes on Thursday because of non-availability of spare engines from engine maker Pratt and Whitney.

IndiGo, run by InterGlobe Aviation Ltd, said Pratt and Whitney has initiated the release of additional spare engines and all aircraft can be expected to be in service soon. The airline did not disclose the number of planes affected.

The glitches with the Pratt and Whitney engines have led to repeated grounding of IndiGo’s planes and has been a constant headache for operators, including IndiGo and GoAir in India, that have taken delivery of the A320neo planes.

A Pratt and Whitney India spokesperson said the company is working closely with all its A320neo operators, including IndiGo, to keep their aircraft flying while continuing to retrofit the fleet to the latest engine configuration. 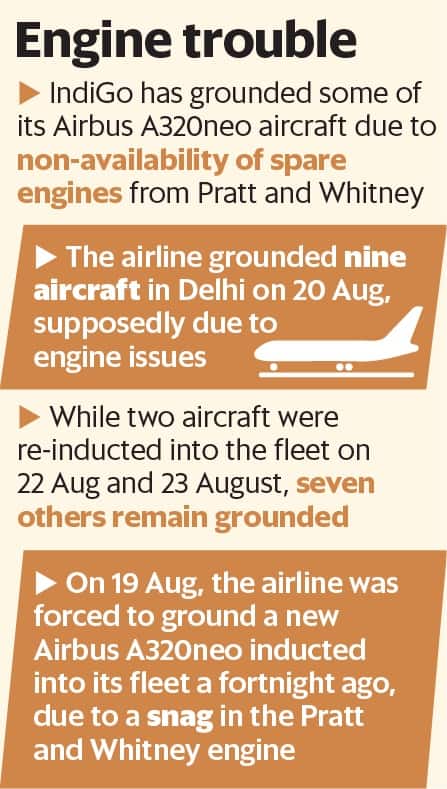 “Engine removals are being planned and coordinated with the airlines as we continue to successfully retrofit the fleet with engines of the latest configuration. Some aircraft will be out of service temporarily as they perform these removals," Pratt and Whitney said.

An IndiGo spokesperson did not comment on Thursday when asked about the number of aircraft grounded by the airline. The spokesperson also did not say if IndiGo had to cancel flights.

“An aircraft on a domestic route normally does seven-eight flights a day," said an executive from a rival airline, who didn’t want to be named.

The Press Trust of India reported on 19 August that IndiGo had been forced to ground a new Airbus A320neo aircraft, inducted into its fleet just a fortnight ago, due to a snag in the Pratt and Whitney engine.

The news agency had cited IndiGo as saying that the grounding did not impact the airline’s flight operations.

The Gurgaon-based airline has since then grounded a few of its aircraft due to engine issues.

Last month, IndiGo’s co-founder, Rahul Bhatia, told analysts after the company’s June quarter earnings that the airline is unhappy with the intermittent grounding of its A320neo fleet due to technical snags or unavailability of spares for its Pratt and Whitney engines.

“We remain cautiously optimistic about the situation and hope that the situation with the spare parts improves in the current quarter," Bhatia said then.

The past two quarters have seen domestic carriers hammered by higher jet fuel prices, a weaker rupee and intense competition, hindering their ability to raise fares sufficiently to cover the higher costs.

IndiGo’s profit plunged by a record 97% in the June quarter, despite an increase in passenger traffic.

A 31 July HDFC Research report on IndiGo states that significant scheduled shop visits for A320neos resulted in increase in maintenance cost for the airline.

The brokerage expects IndiGo’s margins to remain under pressure in the quarters ahead.