New Delhi: An analysis of India’s National Solar Mission shows that a key provision of the policy meant to encourage local manufacturing was actually counterproductive and hobbling the nascent sector. 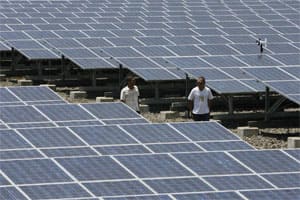 And as prices for thin film technology are cheaper abroad, many developers in India are opting for it over silicon cells and modules, leaving local manufacturers without much business.

“Globally, most solar photovoltaic technology is based on silicon cells, and thin film is about 14-15%, as our report shows," said Arunabha Ghosh, chief executive, Council on Energy, Environment and Water, and among the authors of the study. “India is the only country where there’s an anomaly. More than half the installations in the first phase of the mission are based on thin film and there are no Indian manufacturers."

The reasons, say analysts, include a global dip in the prices of solar cells, the dominance of Chinese solar panels and favourable international financing options for thin film-based technology.

The study, which involved several organizations, including the US-based Natural Resources Defense Council and the Shakti Foundation, argued that the policy doesn’t yet address how ancillary industries around solar manufacturing can be nurtured in India.

To be sure, there is considerable debate on the supremacy of thin films or silicon for making solar panels. The former are newer, not well understood and require more land for generating equivalent power. They, however, also allow the use of a wider range of elements such as cadmium, indium and gallium, and are considered more durable.

Less than half a percentage point of India’s total installed capacity is made of solar sources. Investments in renewable energy sector are substantial, with nearly ₹ 51,000 crore pumped into it in 2011 and more than one-third going to solar power. Among the key thrusts of the solar mission is grooming a domestic sector that can produce at least 5,000 megawatts a year.

“Our aim was to try out all technologies," said Tarun Kapoor, joint secretary in the renewable energy ministry. “There was just one thin film manufacturer—Moser Baer— and they too have now closed down their thin film facilities. If we gave concessions to them, it would look like we’re favouring them. But because of the global upheaval, we might consider making some amendments."

Industry says that several other impediments such as the absence of duties on imported solar equipment further queered the pitch. “More than thin films, the problem is competition from our neighbours (China)," said Vivek Chaturvedi, chief marketing officer, Moser Baer Solar Ltd, among India’s biggest solar power developers. “If there isn’t a level playing field in term of duties, there could be significant problems for the sector."