Eko to focus on institutional clients, bottom of the pyramid

Eko to focus on institutional clients, bottom of the pyramid

Bangalore: After a year of halting production to rethink its business strategy, Bangalore-based maker of electric scooters Eko Vehicles Pvt. Ltd is looking to more than double its sales by focusing on institutional clients and blue-collar workers. 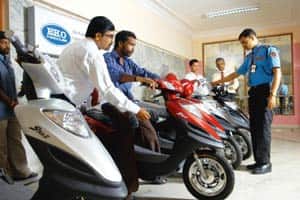 Discovering market: An Eko Vehicles showroom in Bangalore. The company, which plans to concentrate on sales in Karnataka, Andhra Pradesh and Tamil Nadu this year, will focus on selling to blue-collar workers. Hemant Mishra/Mint

India’s electric scooter market is fragmented and the makers have struggled to find buyers for these vehicles. Some companies are now trying to find a dedicated and niche set of buyers as they look to expand the market.

Ananthakrishna, who owns 80% of Eko, is betting on institutional buyers, who he says will bring in the much-needed volumes.

Ananthakrishna expects to sell 20% of his increased production to institutional clients, up from nil earlier. He is also investing Rs10-15 crore to triple annual production capacity at the company’s manufacturing facility in Whitefield, Bangalore, to 36,000 vehicles.

Eko has now signed up with coffee shop chain Cafe Coffee Day, which Ananthakrishna expects will order some 1,200 electric scooters as it starts a new home delivery service.

Karnataka State Police Housing Corp. Ltd, a state-run body, is expected to purchase at least 500 vehicles for its employees by June. Talks are also on with a clutch of clients such as factories in Peenya and Hosur on Bangalore’s outskirts and the Bhabha Atomic Research Centre, Kalpakkam, for its electric scooters.

It makes sense for institutions to buy electric vehicles for their business needs, said Sohinder Gill, chief executive at Hero Electric, the electric scooters subsidiary of Hero Cycles Ltd. The firm has a market leadership of 41%.

Gill says the cost of owning an electric scooter is nearly one-third of that for an average two-wheeler fuelled by petrol: 45 paise a km for an electric vehicle against Rs1.20-1.50 for most other two-wheelers.

Over the past six months, Hero Electric, too, has focused on institutional clients, selling to restaurants and courier companies.

According to Gill, the Indian electric scooter market sold only 80,000 units in fiscal 2010. This pales against China’s annual sales of 10 million electric scooters, but 95% of the demand there is because of a government ban on petrol two-wheelers in several cities.

Gill, also director of corporate affairs at the Society of Indian Electric Vehicle Manufacturers, believes a similar push is required in India for the domestic electronic scooter market to pick up. He is also lobbying with the government for subsidies to the sector.

Eko, which plans to concentrate on sales in Karnataka, Andhra Pradesh and Tamil Nadu this year, is clear its market lies at the bottom of the pyramid.

Positioning its Strike scooter as a cheaper mode of transport than public buses, Eko is targeting security guards, carpenters, domestic helps and the like.

Charging the batteries for an electric scooter would add about Rs60 a month in power bills, and monthly payments, if the scooters are bought under finance, would be around Rs400, said Ananthakrishna, adding that this is still cheaper than the Rs500-900 a security guard would typically spend on bus fare in a month.